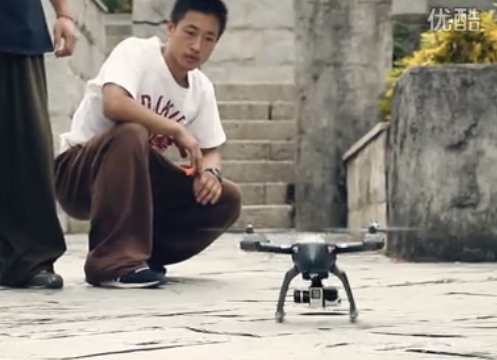 Flypro says it plans to use the proceeds on international expansion and product development.

Its drones can fly and track a moving object, avoid obstacles, and automatically adjust the camera lens to film the moving object. It can also be voice controlled.

(On November 30, 2015: Flypro issued the below press release to announce the funding round:

SHENZHEN, China, Nov. 30, 2015 /PRNewswire/ — Over the last few years, unmanned aerial vehicle (UAV) industry has received a lot of attention, with projects involving drones being the ones most hotly sought after in capital markets. A number of firms have started raising funds, with each new deal raising more funding than its predecessor. On November 27th, FLYPRO Aerospace Tech Co., Ltd. (FLYPRO), the first company in China to specialize in research and development of intelligent UAVs for use by consumers as a hobby or a sport, announced that the company has completed its Series A round of fundraising with $13 million from Yihua Capital.

Lin Hai, founder and CEO of FLYPRO, pointed out that with this round of fundraising, FLYPRO expects to rapidly expand the footprint of its drones in the international market, further product research and development as well as promote the civilian use of drones.

Unlike most UAV developers, FLYPRO focused primarily on the sports and hobby segment. During a press conference, the CEO explained that FLYPRO has been committed to the R&D of innovative intelligent sports drones, ranging from its first auto-tracking drone, the PX400, to its first smart watches as companions to the XEagle UAV. The XEagle, with auto follow and obstacle avoidance functionality, are both tailored for hobbyists and are to be released this month. The technology behind the XEagle, in particular, is a complete reversal from the traditional recognition of the drone’s complex control system, which resulted in poor user experience. The navigation of the drone, product of a number of innovative patented technologies, is controlled by one button on the smart watch, freeing up the hobbyist’s hands so he or she can focus on the moment at hand and use the camera to accurately capture every unforgettable moment from multiple visual angles. The XEagle also comes equipped with several other patented functionalities, including automatic obstacle avoidance when flying at high speed, voice control, multiple security protections and a comprehensive intelligent moving camera.

It is important to note that there are still a lot of firms studying how to reduce the barrier to entry for hobbyists who would like to get involved in the sport. FLYPRO has been able to make drones that are highly accessible to newcomers to the hobby.

The CEO said that FLYPRO was the only drone developer that had staged a performance of a fleet of drones flying in formation, as well as to have released the heavyweight drone, the XEagle, relying on the firm’s advanced technologies and capabilities at innovation.

"FLYPRO, created to serve the hobbyist community, focusing on simple yet intelligent controls, an interesting user experience and cost-efficient high-quality products, is expected become the barometer for and the leader of the intelligent sports drone segment," the CEO said confidently.

FLYPRO, a start-up firm in the consumer segment of the global UAV sector, currently is one of the few innovative hobbyist-oriented developers that has drone-related core technology advantages. The firm is not only specialized in the intelligent design and development of drones, but also possesses a number of industry leading technologies, among them, an advanced flight control system, a visual positioning system and automated obstacle avoidance. To date the firm has successfully obtained dozens of drone-related patents.

Many internationally known television networks and media organizations have reported on FLYPRO and its drone products. The firm has won a number of honors, including the Outstanding Company award at the fourth session of the China Innovation & Entrepreneurship Competition and the Asian Electronic Product Innovation award at the 11th Asian Electronics Forum (AEF). FLYPRO has signed sales contracts with several drone sales organizations with global footprints. Yihua Capital’s investment in FLYPRO, is a very significant milestone for the dark horse in the drone sector.

Yihua Capital Chairman Liu Zhuangqing said: "The investment was based on 2 factors: firstly, FLYPRO is a forerunner in the consumer segment of the intelligent sports drone market with great innovative and development potential. Secondly, we hope that, looking forward, FLYPRO, in its role as an innovative drone developer, will work together with many of the other businesses in the Yihua Group portfolio and create a more innovative space for development and cooperation." Yihua Capital’s investments have focused on the Internet, mobile phone games, downloadable mobile apps, intelligent hardware, biological medicine, intelligent household appliances, new energy applications and new materials among other hot and popular industries. Yihua Capital has completed an integrated investment portfolio assuring broad coverage for its investors.

The ability to engage in cross-border fundraising is not only of profound significance to both parties, it is also a defining moment for the drone industry generally. Industry analysts said the over $US10 million in financing, will, on the one hand, further strengthen the leading position of China’s drone industry globally, while, on the other hand, elevate healthy competition in the global civil drone industry to a new level, greatly promoting the popularization of civil drones worldwide as well as allowing an ever widening group of consumers to more easily get a bird’s eye view of the world and extend their perception of the universe around them.)