BEIJING, Dec. 27, 2019 /PRNewswire/ -- iQIYI, Inc. (NASDAQ: IQ) ("iQIYI" or the "Company"), an innovative market-leading online entertainment service in China, recently announced newly appointed mentors of its hit original variety show Youth with You ("Youth with You Season 2" or the "Show"). Cai Xukun, team leader of NINEPERCENT, a boy group formed in 2018 through Idol Producer, an original variety show created by iQIYI, will be the Show's Youth Producer. Jony J, a popular Chinese hip-hop singer known by people through The Rap of China, has been appointed as the Show's rap mentor to provide professional guidance for the trainees. Following the announcement, the news instantly topped trending topics of Weibo, Chinese Twitter, with audiences and fans expressed excitements and great anticipations towards the Show. 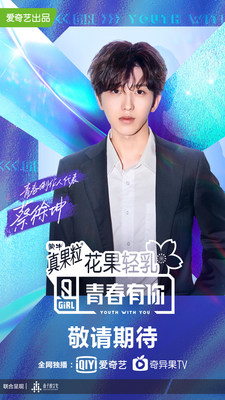 Youth with You Season 2 is an idol-selection show that brings together female idol trainees for training and competition, of which at the end, only a few girls are selected through viewers' votes to debut as an idol group. Previously, iQIYI announced at its annual iJOY Conference that Lisa, the member of K-pop girl group BLACKPINK, will join as the Show's mentor, generated heated discussions both in China and abroad. Having developed a unique trainee selection and operations system, iQIYI has produced successful boy groups such as NINEPERCENT and UNINE through its original reality shows, and has been devoted to leading Chinese youth culture by producing hit original variety shows including Idol Producer, Youth with You and The Rap of China.

Youth with You Season 2 will be exclusively streamed on iQIYI's platform in Q1 2020. Thanks to its strong influence among younger generations and its endeavors to promote China's youth culture, the Show has received great recognitions from the industry as being selected onto the 2020 Power List of Making Film Together and awarded with "Most Anticipated Variety Show" from Entertainment Capital, both of which are popular Chinese entertainment media.