BEIJING, Feb. 2, 2020 /PRNewswire/ -- iQIYI, Inc. (NASDAQ: IQ) ("iQIYI" or the "Company"), an innovative market-leading online entertainment service in China, jointly announced with the production and distribution teams of Enter The Fat Dragon (the "Film") that the action comedy film has been made available to viewers on iQIYI's online streaming platform on February 1 through its early-access transactional on-demand mode (the "Mode"). The Film was originally scheduled for theatrical release across China on February 14. 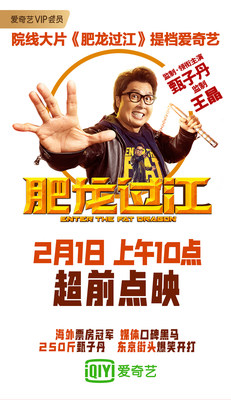 Caused by the outbreak of the novel coronavirus in China, film viewing habits and demands of Chinese consumers have shifted from outings to the cinema to online streaming at home. In response to this development, iQIYI swiftly reached an agreement with the Film's production and distribution teams that satisfies consumers' demands to view new film releases without leaving their home.

Directed by Kenji Tanigaki, action director of Monster Hunt 2, and starring Donnie Yen, Teresa Mao, Niki Chow LaiKei, and Jing Wong, the Film tells the story of a Hong Kong police officer who is highly skilled in martial arts despite being very overweight, goes abroad for an investigation.

"At present, China is actively fighting the coronavirus and people are encouraged to stay at home and avoid public gatherings. Taking this into consideration, it is unfitting to schedule new film releases at cinemas in the short term," said Jing Wong, producer of Enter The Fat Dragon, "In order for audiences to access this premium content as soon as possible, we decided to release the Film on iQIYI, hoping that it would give everyone a glimmer of sunshine amidst the haze."

iQIYI's "early-access transactional on-demand" mode was introduced in effort to balance the interests of users, film producers and platforms. The Mode allows users to view latest releases online at a moderate price, while also enabling film producers to obtain greater revenue by establishing more distribution channels. The Mode is expected to serve as a healthy development model for the film sector, under the basis that platforms can attract more users by providing high-quality content, users are more willing to pay for high-quality films while film producers launch more high-quality work with the platforms' support. Platforms could in turn also obtain more high-quality film resources.

"The coronavirus outbreak is a test for the whole nation and the film market. With many users staying at home with a demand for quality films, we hope that this mode will attract films of our users taste and help us meet their demands of online streaming," said Song Jia, General Manager of iQIYI Film Center, "This innovative mode is a particular measure during the coronavirus outbreak, and iQIYI will continue exploring a win-win mode for the film distribution and actively maintaining the sustainable and healthy development of China's film industry. We are open and willing to cooperate on realizing the online releases of high-quality and popular movies. It took us a very short time to achieve the release of Enter the Fat Dragon. We have always had conviction in 'being the most reliable partner of filmmakers and providing the best movies for the audience.' I hope to provide long-term services for viewers and partners in the film industry through this model, and jointly tackle current and future market challenges."

iQIYI has released a selection of VIP films for free viewing, such as Spirited Away, Tonari no Totoro, Youth, Adrift, and Legend Of The Demon Cat, to meet the rise of user demands against the backdrop of theatrical release cancellations caused by the coronavirus outbreak. The joint initiative of iQIYI and the Film's production and distribution teams to move the Enter the Fat Dragon from cinemas offline to early-access transactional on-demand screening online will further enrich viewers' choice of new releases during the Spring Festival.