NEW YORK, April 28, 2020 /PRNewswire/ -- Several months after Aqara launched its main product line on Amazon.com, receiving positive consumer reviews and selling out quickly, the company has widened its presence on Amazon.com by launching its latest Zigbee 3.0 wall switches on April 27. Moreover, along with the switches, Aqara is launching its famous Cube, a small-yet-powerful device able to control the whole range of other smart home devices. 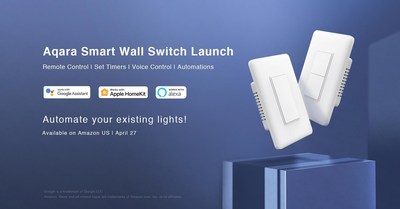 Aqara Smart Wall Switch comes in four versions differentiated by the number of rockers or buttons (Single and Double Rocker) and the support of Neutral wire (With Neutral and No Neutral). Its features include: newest Zigbee 3.0 protocol, integration into the most popular ecosystems present on the market (such as Apple HomeKit, Amazon Alexa and Google Assistant), timer function, support of automations via Aqara Home app and many more. For those who care about electricity bills, it offers a power consumption statistic available via the app along with remote controls available from anywhere in the world. The switch is fully compliant with U.S. wall switch standards and features easy installation with a single screwdriver required to complete it. As for the build and design, the minimalistic housing of the new Wall Switch was tested to support up to 100,000 on/off switches, which will make the observable useful life practically infinite.

Another product being launched, the Aqara Cube, is a small and unique piece of tech that incorporates various sensors to support 6 different gestures, which can control any other Aqara smart home devices. Its clean and compact design, which can fit almost any surface, will make its use frequent and intuitive.

Together, the released products are able to successfully control lights or other wired appliances such as bathroom exhaust both remotely and in a more classic way, and will complement smart home devices no matter which of the aforementioned ecosystems are used.

Moreover, to celebrate the launch, Aqara has prepared a 20% discount on the newly-released products for a limited time with the use of the code: AQARAPRS. Click here to shop.