SINGAPORE, April 21, 2021 /PRNewswire/ -- Bigo Live, a leading global live streaming platform, is excited to welcome Singaporean musician and actress, Narelle Kheng for a mini concert livestream on Thursday, 22 April at 9:00PM SGT. Now a solo artist, Narelle first rose to fame as part of local pop quartet, The Sam Willows. During her livestream, she will be performing two of her latest singles 'Complicated Love Song' and 'Just Shut Up' for the first time, exclusively on the Bigo Live platform. 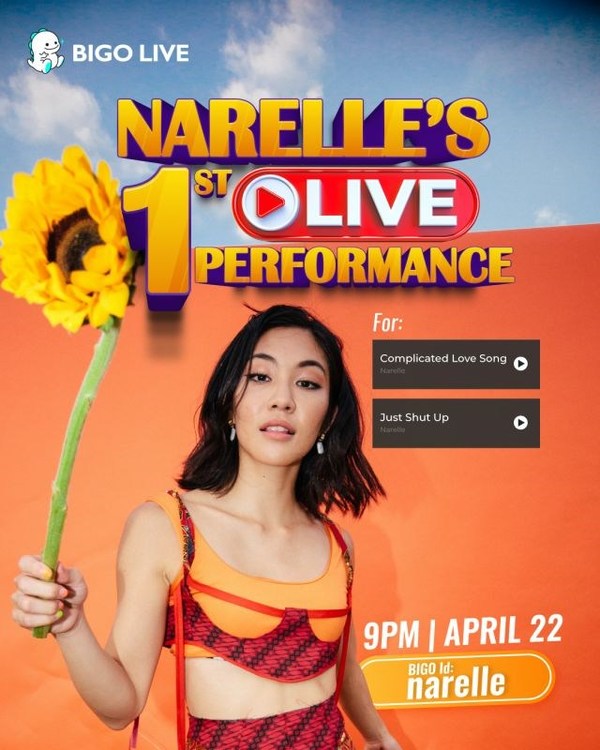 As part of her livestream, Bigo Live users will get to participate in a special in-app activity running until Wednesday, 21 April, 11:59PM SGT for a chance to get up close and personal with the songstress. Fans can post a short clip of themselves singing on Bigo Bar, and the top three users with the most liked posts will get to interact with Narelle during her livestream via a video call.

"Bigo Live is a great platform that allows me to connect with my fans in a safe, interactive and fun way. With social distancing measures that have restricted in-person engagements with fans for over a year,  Bigo Live is an amazing alternative venue for me to perform, share my passion for singing and showcase my newest singles. I look forward to my first livestream and this opportunity to meet and greet my fans," says Narelle Kheng.

Bigo Live strives to become the go-to source for interactive and engaging entertainment, and such engagements are part of Bigo Live's efforts to provide exclusive opportunities for the community to interact with their favourite local celebrities. Narelle joins the ranks of other global celebrities like Australian DJ M4Sonic, Japanese stars Ryo Nishikido and Jin Akanishi among many others, who similarly took to Bigo Live to bring positivity, hope and joy to users around the world.

Bigo Live is one of the world's fastest-growing livestreaming social communities where users broadcast in real-time to share life moments, showcase their talents and interact with people from around the world. Bigo Live has around 400 million users in over 150 countries and is currently the market leader in the livestreaming industry. Launched in March 2016, Bigo Live is owned by BIGO Technology which is based in Singapore.

ImmVira completed the first dosing for Phase II of MVR-T3011 (intratumoral injection) in the U.S. and China