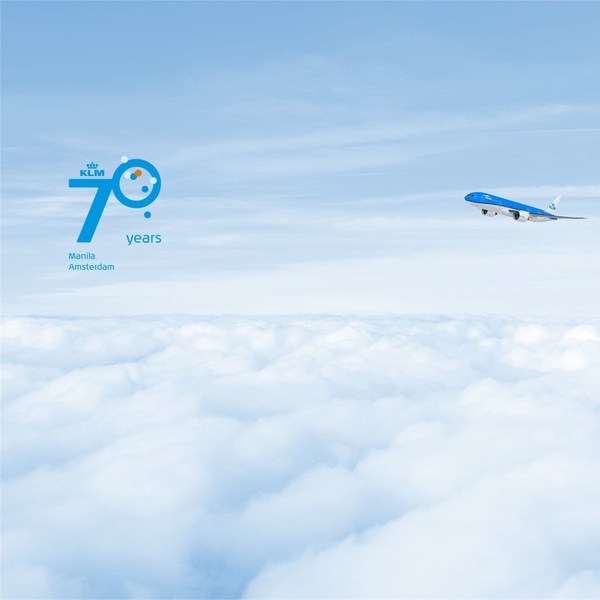 KLM launched flights to Manila in 1951 when KLM introduced scheduled flights from Amsterdam to Tokyo. This first flight, in a Lockheed Constellation aircraft, made six stops including Manila.

Since that time KLM has been the first and only European airline to operate flights continuously between Amsterdam and Manila.

In honour of this milestone and to celebrate the future, KLM will reduce the CO2 footprint of all passengers travelling from Amsterdam to Manila on 4 December 2021, the day, 70 years ago, this historical flight left Amsterdam.

KLM will be celebrating their 70th anniversary by engaging customers and travel agents at two virtual events and customers travelling on KLM from Manila to Amsterdam on 5 December 2021 will receive a little surprise at the boarding gate.

Arthur Plugge, Country Manager of AIR FRANCE KLM Philippines said, "We proudly mark KLM's 70th anniversary in the Philippines. With this significant achievement, we would like to thank our customers for their ongoing support, especially during this trying period. I am proud KLM has been able to maintain a link between Manila and the rest of the world essential for the numerous marine industry employees.

Celebrating this milestone with our customers shows KLM's commitment to support our activities in the Philippines and we look forward to another remarkable 70 years."

For over a century, KLM has been a pioneer in the airline industry. KLM is the oldest airline still operating under its original name and aims to be the leading European network carrier in customer centricity, efficiency and sustainability.

The KLM network connects the Netherlands with the world's key economic regions and is a powerful engine driving the Dutch economy.

KLM Royal Dutch Airlines is part of the Air France–KLM Group. KLM is also a member of the global SkyTeam Alliance, which has 19 member airlines.