SINGAPORE, Dec. 3, 2021 /PRNewswire/ -- AAG Ventures (AAGV), the fast-growing Play-to-Earn (P2E) guild and P2E / Learn-to-Earn (L2E) platform, is pleased to announce that it has successfully raised over $12 million in a private funding round that concluded this week. This is the 2nd largest private round for P2E guilds or guild platforms reported to date. 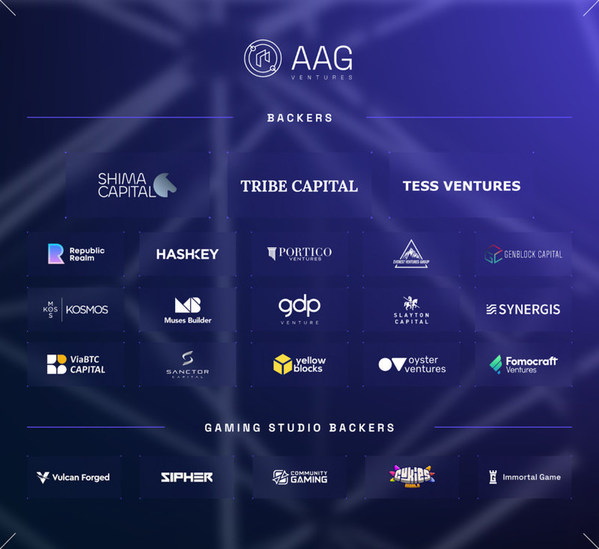 AAG Ventures Raises $12.5M in Private Round to Create Economic Empowerment through Play-To-Earn and Learn-To-Earn

"The shift from Free2Play to Play2Earn will give rise to the guild model and foster the growth of hundreds of guild startups," said Han Kao, founder of Sanctor Capital. "AAG Ventures takes this fundamental evolution one step further by providing the tools and infrastructure for these such guilds to operate and serve their scholars."

The funding will allow AAGV to launch beta versions of its P2E and L2E platforms in 2022 as well as expand its guild. The company has a goal to bring 100M people onto the metaverse by 2030 to spread economic sufficiency.  "Play-To-Earn has given the world a way to deliver billions of dollars to millions of people, often where it is most needed and through an engaging medium," said Nelly Sutjiadi, Co-Founder and Chairwoman ", We're excited to accelerate and amplify its impact, as well as introduce the sister concept of Learn-To-Earn, which we think will have comparable impact while educating people."

The P2E platform will provide the software infrastructure needed by nearly all P2E guilds and serve as the backbone for P2E participants. "We think the best chance for us to get to 100M scholars is by cooperating and enabling other guilds rather than competing with them," said AAGV Co-Founder and CEO Jack Vinijtrongjit. "The platform model is how we can best do that and is aligned with our deep software expertise."

The L2E platform is a new concept that takes the best of P2E but redirects its focus directly on education. L2E players will earn crypto while learning transferable skills (e.g., math, programming) that can make them more employable in a gamified fashion. Vladimir Velmeshev, Partner at Kosmos Ventures says ", We are also excited about AAGV's exploration of future use cases for P2E and the potential shift from in-game tasks to more useful tasks, such as programming, learning, or general problem-solving."

The funding will also enable AAGV to continue to expand its own guild, which currently includes more than 2,000 scholars across the Philippines and six other countries. This effort will help more people achieve economic sufficiency through P2E and also allow AAGV to expand across the globe, diversify across games and most importantly gain insights on Guilds' pain points to inform the P2E Platform design.