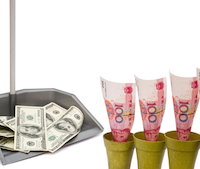 In early June, we turned bullish on onshore RMB (CNY), expecting the currency to resume appreciation after weakening for most of the first half of the year.

Our rationale was that the depreciation in CNY between mid-January and May, though partly driven by the authorities, had been in line with the weakening in Chinese economic activity over that period.

But pro-growth policies would lead to a stabilization and improvement in economic activity over the second half of the year, resulting in a recovery in the CNY.

Since then, the CNY has indeed appreciated, and this was despite a generally stronger U.S. dollar environment. Notably, the CNY spot, which had been trading at the weak side of the band in June, has now moved to the strong side for the first time since early March.

The appreciation in the currency thus far has been broadly tracking the improvement in the Chinese data flow, in line with our view. Importantly, the authorities do not appear to be intervening to stem the appreciation move, as evidenced by the Chinese central bank’s net forex purchase data which showed net selling of US$14 billion in June, a turnaround from the strong net buying over January to April totaling US$142.5 billion.

This is an indication that the People’s Bank of China is comfortable with the recent appreciation in CNY.

The question is whether we will see further appreciation, especially in a stronger U.S. dollar environment, as we get closer towards eventual U.S. Federal Reserve rate hikes.

In our view, the answer is yes. We see two sources of further demand for CNY, over and above the normal trade and foreign direct investment-related demand.

The first is from a conversion of forex deposits into CNY. Since January, when CNY started to depreciate, there has been a surge in forex deposits, rising by US$145 billion over the first half this year – more than the trade surplus over that period.

But as depreciation expectations diminish, the pace of forex deposit growth will ease off substantially, as some of those foreign currencies get converted into CNY.

The second source of demand for CNY will be through ongoing foreign portfolio inflows into China. Despite China being the second largest economy in the world, foreign investor participation in Chinese assets is low due to capital restrictions.

But this is changing as China continues to liberalize its capital account. For example, since the introduction of the Renminbi Qualified Foreign Institutional Investor (RQFII) program in 2011, there has been a noticeable increase in foreign inflows, particularly into bonds.

As China further relaxes its rules, we should see a continued structural increase in foreign investor flows into China. Indeed, we can expect some diversification flows into China from reserve managers as well. The Reserve Bank of Austrlia has publicly disclosed that they now hold around 3% of their net foreign reserves in RMB, and other central banks are expected to follow suit over time.

Another development that will see increased CNY demand in the near-term is the Shanghai-Hong Kong Stock Connect program. Set to operate from October, it allows overseas investors access to China A-shares without needing to apply for approval, while mainland investors will be able to trade Hong Kong stocks through the Shanghai Stock Exchange platform.

This effectively opens up the Chinese equity market to the world via Hong Kong. Although there are quotas in place, they are sizable and we envisage them increasing over time. Anticipation of the Shanghai-Hong Kong Stock Connect could be partly behind the strong rally in the Shanghai A-share index lately.

We maintain our year end USD/CNY forecast at 6.15.

Though the PBoC has indicated a desire to allow the exchange rate to be more market determined, and officials have expressed their concern over the size of the forex reserves, we still see a risk of intervention should the CNY appreciation moves get too one sided.