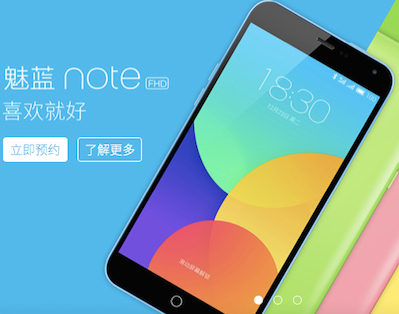 In December 2014, media reports surfaced that Meizu has received RMB2 billion (US$320 million) of financing cumulatively from an undisclosed financial investor.

The deal, which is still subject to closing conditions, will see Alibaba Group and Meizu collaborate at both strategic and business levels to achieve a deeper integration of Meizu’s hardware and Alibaba Group’s mobile operating system.

Alibaba Group will provide Meizu with resources and support in the fields of e-commerce, mobile Internet, mobile operating system and data analysis with the aim of developing Meizu’s smartphone ecosystem.

"The investment in Meizu represents a significant expansion of the Alibaba Group ecosystem and an important step in our overall mobile strategy as we strive to bring users a wider array of mobile offerings and experiences," says Wang Jian, chief technology officer of Alibaba Group.

Founded in 2003, Meizu shipped around two million phones in 2013 with revenue of RMB5 billion (US$810 million). The company is expecting to double its sales in 2014, and plans to pursue an IPO within five years.

At the end of 2014, China had more than one billion mobile phone users and about 40% of them use smartphones, according to market research firm, the International Data Corporation (IDC).