NEW TAIPEI CITY, Taiwan, April 2, 2021 /PRNewswire/ -- The first brand of the genuine mobile game "Three Kingdoms Heroes M" is officially announced that the pre-register has rapidly exceeded 500,000 people. In order to thank the players for their support, the USERJOY official has held the pre-register event. As long as pre-register before the game is launched on April 15th, players can participate in the iPhone12 draw activity. 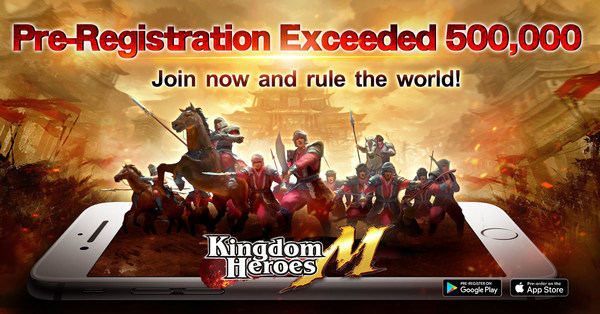 The "Three Kingdoms Heroes" game brand has been in business for 24 years, and the game has swept over hundreds of millions of Asian people. Now, the global version of the "Three Kingdoms Heroes M" mobile game, which inherits the essential State War in the original PC version, is going to be launched at the same time in Singapore, Malaysia, Indonesia, and Thailand. Since the opening of pre-register, the popularity of the game has risen incredibly. In order to respond to the enthusiasm of players, they have held the pre-register event that players can obtain exclusive rewards and a chance to win iPhone 12 after the game is launched. Officials stated that they are making every effort to prepare the "Three Kingdoms Heroes M" listing plan, which is expected to be officially launched on April 15. Please stay tuned.

Pathfinder: Wrath of the Righteous released to Nintendo Switch(TM) on 29th Sept., supported by Ubitus