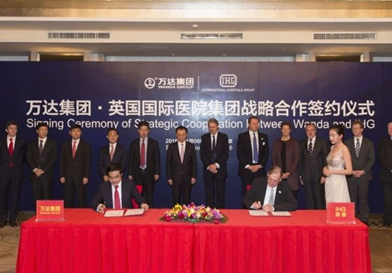 Dalian Wanda Group says it plans to invest RMB15 billion (US$2.3 billion) to build three high-end hospitals in China in partnership with the International Hospitals Group Ltd. (IHG), according to a company announcement (in Chinese).

"Bringing top-tier general hospitals to China will not only meet increasing demand of the Chinese people, but also improve the healthcare standard for the city," says Wanda chairman Wang Jianlin, who is Asia’s riches man.

U.K.-based IHG will build the hospitals and ensure that they obtain certification by the Joint Commission International (JCI), which is considered the gold standard in global health care.

IHG will also manage the hospitals, which will be branded as HIG Wanda International Hospital. The word "HIG" has been translated into "Yingci" in Chinese.

Construction for the Qingdao hospital has already begun and is expected to be fully operational in 2018. The Chengdu and Shanghai hospitals will begin construction this year.

The three hospitals combined will have 1,700 beds in total once completed.

Founded in 1978, IHG has completed over 450 healthcare projects in 49 countries for private and public sector clients, including 22 national governments, the United Nations, the World Bank and the International Finance Corporation, according to the announcement.