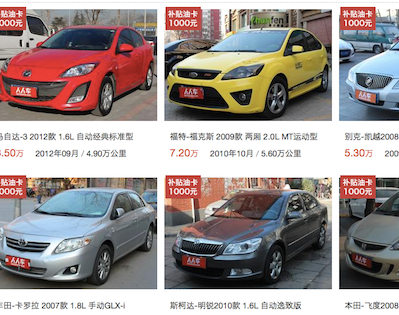 Didi Chuxing has bought US$200 million worth of shares in Beijing-based second-hand car marketplace Renrenche.com in a strategic investment, marking the latest investment deal in China’s fast moving online used-car market, according to Didi’s announcement.

The funding is a boost for Renrenche, as its three top competitors have each raised money recently. Uxin Group, Guazi.com and Souche.com raised US$500 million, US$250 million and US$180 respectively this year. Renrenche’s most recent funding was a US$150 million series D round in September, 2016, leaving the company fourth on China Money Network’s best-funded used-car trading companies list.

Following the deal, Renrenche will likely be able to leverage Didi’s large network of drivers to gain both customers and a supply of second-hand cars. As of last September, Didi had more than 15 million drivers including taxi drivers, Uber drivers and designated drivers. Li told local media that the industry faces a supply shortage of used cars, stating "As long as we can find used-car supply, there will be buyers."

The deal may also help Renrenche in terms of lower-cost advertising. Used-car platforms have been burning cash on advertisement to attract traffic. Last year, Guazi.com and Renrenche spent RMB1 billion (US$150 million) and RMB500 million (US$75 million) respectively on celebrity branding. With the investment, Renrenche will be shown in Didi’s used car app, gaining direct access to Didi’s large user base.

The Chinese used-car trading platforms are a competitive and fragmented sector, with at least eight major players, each with more than US$170 in funding. In June, Guazi.com had the largest number of users, or 4.3 million independent devices using its app. Uxin and Renrenche came second and third, with 1.69 million devices and 1.34 million devices, according to a report by IIMedia Research Group.

Another report from Analysys.cn defines active users as users who use the mobile app at least once a month. With this method, Guazi.com still came first, while Che168.com and Renrenche came second and third in June.