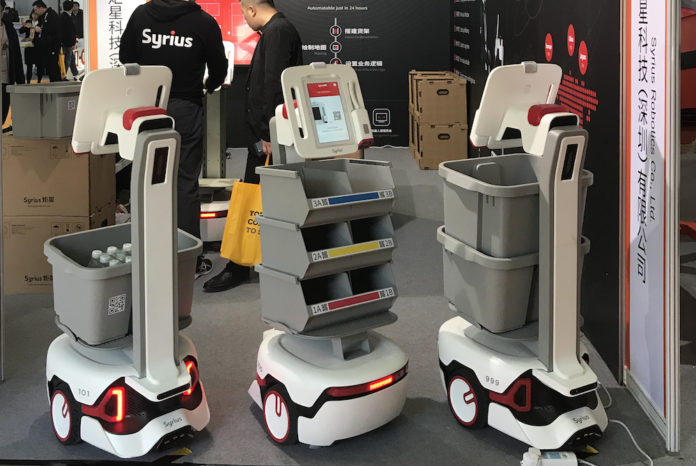 An experienced and robust founding team. A series of rapid venture investments. A mere thirteen-month period for an idea to turn into the first product shipment in an emerging and promising new market. These are the development trajectories of an early-stage logistics robot startup in Shenzhen that pretty much sums up the reasons why China is winning the global innovation race.

Syrius Robotics was founed in May 2018 by Adam Jiang with work experience at Motorola and Nvidia, Luo Xuan who was previously at Alibaba Robotics, and Liu Junbin, a PhD of electrical engineering and computer sciences. The company makes autonomous mobile robots (AMRs), a new generation of logistics robots that are more agile, intelligent and economical.

Syrius took six months to design its first model of AMR, and in another seven months shipped the first batch of products to a client in Japan. This feat was achieved with the help of two VC financing deals: an angel round led by Future Capital and a pre-A round led by ZhenFund in the span of eight months.

This is China speed, which is one of the key drivers that are enabling Chinese startups to win new clients globally. "Shenzhen’s ecosystems are more mature, especialy in electronics. Plus, we know the factories and people very well," Luo Xuan, co-founder of Syrius, told China Money Network last month at the company’s Shenzhen office.

In addition, Chinese startups enjoy their traditional competitive edge in low costs and prices. In Syrius’ case, its AMR costs only around 20% of its global peer, Locus Robotics. For example, Syrius uses lidar sensors that are made in China and cost only a fraction of those made in developed markets. "Our core competitiveness is in our algorithms, so we don’t have to rely on the quality of our hardware," Luo said.

When people hear about logistics robots, the first thing that comes to mind is usually Kiva Systesm, an automated guided vehicle (AGV) company acquired by Amazon five years ago. These robots move around the warehouse guided by marked lines or wires on the floor. They can lift up and move shelves of products around the warehouse. AMRs, on the other hand, use various sensors to detect the environment and move around the warehouse with higher degree of flexibility. In general, they carry boxes of products around and are more suitable for moving smaller amount of goods.

AMRs offer a more flexible solution to the product movement problem at warehouses. More importantly, AMRs are more economical. Unlike AGVs that require installing infrastructure (such as the lines on the floor) or redesigning the warehouse for deployment, AMRs can be doplyed directly to any warehouse at any scale. For smaller warehouses, for example, a number of AMRs can be deployed for only the costs of the robots themselves.

But startups in China also faces unique challenges. Syrius is focusing on overseas clients initially, because payment cycles are too long in China, Luo said. It is also easy for other teams in China to copy product ideas and take market share based on strong government relationships.

Being original is still not the strenghth of Chinese startups in general. Syrius’ products are very similar to those of Locus Robotics, which was founded in 2014 with offices in India and the United States, backed by DHL and other investors.

Though Syrius may have taken some inspirations from other companies, it is trying to build a differentiated product by giving its robots stronger abilities to sense its environment and better self-learning capabilities. "Our key driver is to bring disruptive changes (to the industry) from the perspective of costs and stability. This is why we started," Luo said.