This article by BAILEY HU originally appeared on TechNode, the leading English authority on technology in China.

Over the last year or so, Beijing-based online celebrity Liu Qikun has noticed a significant drop in his income from videos: from as high as RMB 200,000 (around $30,000) a month to a few tens of thousands. Liu pursues a full-time career based around Douyin, one of China’s most popular short-video platforms.

Argentinian app star Brian O’Shea, who studies in Beijing, has seen a similar slump in the growth of followers. Back during the “golden days” of the app last year, “I got a million fans in 24 hours at some point,” he told TechNode. “Every time I would upload a jiaozi video, a dumpling video, I would get 200,000 fans,” he said, referring to the humorous clips in which he consumes unusual dumplings of his own creation.

“That was great, but now it’s slowed down because the algorithms change depending on the number of fans. So now it’s really hard for a big account to get a good promotion,” O’Shea said. While updated official figures aren’t available, his personal impression is that Chinese viewers aren’t spending as much time on Douyin as before.

In 2018, however, user traffic on the app soared. Last fall, Zhang Fuping–vice president of Bytedance, the company behind Douyin and its international version TikTok–said that the domestic daily active user (DAU) count had hit 200 million as of October. Monthly active users (MAU) surpassed 400 million, he added.

Both figures rose more than 30% from statistics released by the company just five months prior. In December, another Bytedance report even showed a slightly higher rate of growth near the end of the year. The simultaneous explosion of TikTok on the international scene has been similarly well-documented. The company hasn’t publicly released active user numbers for Douyin in 2019, however. 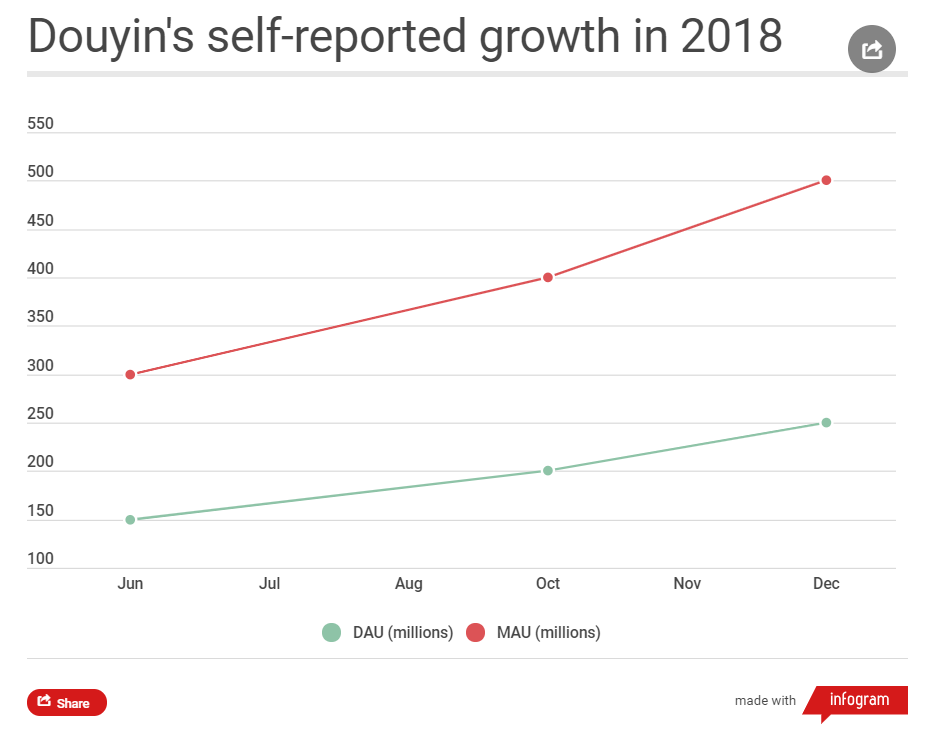 While figures collected by research group iiMedia are much lower than Bytedance’s claims, analyst Liu Jiehao (who is not related to Liu Qikun) agrees that Douyin saw an “explosive stage of growth” last year. “In 2019 Douyin’s monthly active users basically stayed around the level of 230 million,” Liu Jiehao told TechNode.

That plateau in popularity is reflected across the industry: after reaching an estimated penetration rate of some 60% among Chinese mobile internet users in 2018, short-videos simply have less room to grow. In February the research group predicted that while China’s short-video audience will keep expanding in the next two years, year-on-year growth will drop to around 25% in 2019, compared to more than 100% in 2018.

Opportunities to monetize have a more optimistic outlook, at least for the near future. The short-video industry reached RMB 11.7 billion ($1.7 billion) in value over 2018, according to iiMedia. This year, they’ll generate around RMB 23 billion ($3.5 billion), according to projections by the research group.

When asked whether Douyin KOLs have experienced a slowdown in visitor traffic over recent months, a Bytedance representative declined to comment.

Influencer Liu Qikun, whose online handle is “Uncle Beibei” (our translation), supplements his earnings from short videos with a job at a multi-channel network (MCN), where he advises other Douyin celebrities on their careers.

He’s staked a lot on the potential of the short-video industry. “About half a year after I encountered Douyin, I quit my banking job [in Hulun Beir, Inner Mongolia] and came to Beijing to make short videos.”

If that seems abrupt, consider Liu’s similarly dramatic rise on Douyin. For his first ever entry on the platform, he lip-synced Keith Ape’s “It G Ma” from the front seat of a car for a video challenge—a competition among influencers to make the catchiest rendition of trending content.

Liu’s exaggerated facial expressions and comedic timing paid off, gaining him first place in the challenge rankings as well as 50,000 followers.

After roughly 10 months and some viral videos later, Liu had racked up 1 million fans. He began receiving invitations from Douyin to pair up with potential advertising clients, as well as attend offline events to meet other influencers.

However, many of those events required him to visit Beijing. To keep growing his presence on Douyin, Liu decided to move to the capital. Now, around two years after his first video, he has nearly 3 million followers on Douyin as well as his job at the MCN.

“With Douyin and other apps, the difference is that on Douyin the content can grow viewers more quickly. There is more content and categories of content. To put it another way, there are more users…”

However, Liu considers his full-time Douyin-based career to be rare. He suspects that’s due to the sheer growth in number of Douyin influencers, causing individual celebrities to earn less on average.

Other reasons, according to iiMedia analyst Liu Jiehao, include a general economic slowdown that’s tightened budgets for advertising brands. In addition, the rise of MCNs like Liu Qikun’s have helped increase the “supply” of content, not to mention stars: besides advising and managing influencers’ careers, his company also scouts for new talent.

In Liu Qikun’s opinion, the lifespan of an average “pan-entertainment” influencer without a specialty—such as makeup tutorials, for instance—is only six or seven months.

“Audiences will suffer aesthetic fatigue,” he told TechNode. Liu himself switches up his style every three months or so based on trends; his repertoire includes slapstick humor, imitations of children, as well as scripted/subtitled stories, all 15 seconds or less.

“If you haven’t put out a major hit for a long time, they might forget about you,” Liu said.

At the Beijing-based MCN where Liu works, many influencers balance Douyin with other internet tech-related work, or full-time employment.

Even O’Shea, who has racked up more than 5 million Douyin followers while still a student, isn’t sure how long the platform will last. “It’s really hard to say, because the Chinese market grows fast, changes fast.”

“Even if it [Douyin] has slowed down, it’s still the hottest app out there. So far nothing has come out to replace it,” O’Shea said.

“It can be stressful” being a short-video celebrity, O’Shea said before pausing to take a photo with a fan. It was the third time he’d been approached during a 30-minute phone conversation with TechNode. “But it’s still the best job in the world.”

In addition to acting, a related passion, he hopes to continue creating short videos “at least for the next five years.”

Liu Qikun, the influencer who moved to Beijing to pursue online performance, believes that Douyin’s business is a “sustainable thing, as long as the internet is around.” Just like YouTube elsewhere in the world, short-video and livestreaming platforms have brought influencers and audience members closer across China.

Liu attributes the success of Douyin and similar apps to creating new forms of interaction. “Before, you wouldn’t see what other people’s lives are like, but now you can see it on your phone.”

With additional reporting by Cassidy McDonald and Sheng Wei, and contributions from Tony Xu.