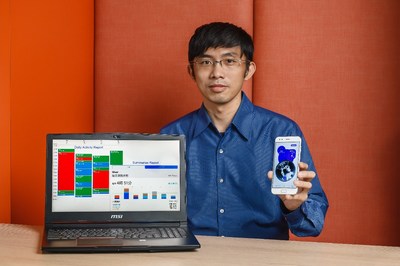 Through cameras installed inside the household, Beyond Vision’s solution CarePLUS can detect the motions and postures of beloved family members with AI and release warning messages at the moment of danger, such as falling, sitting too long, leaving home without a clear reason, etc.

The political-economic landscape widely varies among regions, but one common problem faced most of the people: Aging. Already an aged society, Taiwan is poised to become a super-aged society in 2025 and is the most rapidly aging country worldwide. Eldercare has become a hot button topic these days. How technology can be leveraged as a key aide to the aged population?

Beyond Vision, a startup providing a solution in the form of an AI healthcare product, CarePLUS. Through cameras installed inside the household, the solution can detect the motions and postures of beloved family members with AI and release warning messages at the moment of danger, such as falling, sitting too long, leaving home without a clear reason, etc.

Beyond Vision Founder Victor Lin himself has much to say in connection with Taiwan's aging crisis, an issue close to his heart. Not only are his parents already past sixty, but his grandparents have already reached their eighties. Living apart from his elders has oftentimes made it difficult for him check on their situation in real-time. When his grandmother fell and injured herself a while back, the family didn't realize the incident until a few moments later.

And Victor Lin is not alone in this predicament. There is a significant increase in the number of elderly people living in solitude compared to the past, and family members often have no way to be aware of emergencies at the moment they occur. Japan even has the term "kudokushi" ("lonely death"), which is used to describe elderly people who live alone and fall victim to sudden illnesses or emergencies, as they have no way to seek assistance. "We want to use technology to discover these problems sooner," says Victor.

Beyond Vision engaged with eldercare beginning this year. Despite already existing technological products that send an alarm based on elderly fall detection, Beyond Vision thinks that there are many more areas for domestic detection besides falling. For example, elderly people with dementia may leave home spontaneously or sit for long periods before getting up. Beyond Vision has therefore developed CarePLUS, which functions using physical devices and app interfaces. A physical device is first installed on the ceiling of the living room, "since the living room is the best place to oversee every entrance and exit," according to Victor. A 360 fisheye lens is used to capture the actions of all family members within that area, and the images are analyzed with AI machine learning into motions and postures.

Every time an elder is detected to have fallen, sit too long, remain too long in the restroom, leave home at the wrong times, etc., the app will give off an alarm to notify all family members. A user may also open the app interface and see a real-time video of the home's interior.

Victor says that, after installing CarePLUS, machine learning requires at least three days to identify the environment and record family member behavior to generate a preliminary analytic report. This report organizes all the events that happened in the living room during those three days on a timeline. If the user wishes to know the activities of a specific family member, they may manually add individual ID tags for the machine to use later. "People's activities at home are quite habitual. You may, for example, have a fixed spot on the couch you like to sit. Not only is position an important indicator, but movement speed may also be used to quickly identify a person. These are all assisting factors that help the AI determine who is who through habitual behaviors."

In the process of accumulating data, Beyond Vision are also creating technological barriers. Victor points out that there is already a rich repository of flat lens footages serving as data for machine learning training. CarePLUS's ultra-wide 360-degree angle view forms a blue ocean of data: Every moment of posture identification is a moment of unique data accumulation. "Fisheye lenses cause a distortion of people's shapes and motions, which we overcome with a specific technology. This also continually raises the bar for others."

Victor thinks that this is precisely the biggest advantage that CarePLUS has over all the other existing home monitoring camera products in the market.

Not only does CarePLUS provide immediate alarms, but given more time, it may also conduct long-term health analysis. A professional team at a hospital claimed that the daily activities of elderly people not only affect nighttime sleeping quality but may also lead to chronic diseases. Too little activity, for example, may lead to sarcopenia, and may also cause apnea due to body fluid overload, increased heart rate and increased pressure on the lungs. "Data of these daily activities may, therefore, assist the doctor when making judgment calls."

Besides healthcare information, CarePLUS can also branch out to other areas of service, such as meal ordering and taxi calls. Victor gives the example: The machine has learned through daily life analyses that Mom often enters the kitchen to prepare lunch at 11. If one day, Mom has yet to enter the kitchen, it may mean that Mom won't be cooking today. The device may then automatically ask whether she needs to place a meal order. Beyond Vision is currently working hard on a Smart Speaker function that will allow the machine to analyze sentences and understand the user's true intention. "Maybe the person did not fall but was merely getting down to scrub the floor. The machine may learn the actual situation by asking. We stress that machine learning won't be used to cover all areas, but will instead be playing a supplemental role in human-machine interaction with its user-centered design."

CarePLUS is currently expected to sell for US$299 and includes basic warning functions. If the user requires an in-depth activity analysis report that spans a longer period, or wishes to use the meal ordering or taxi call features in the future, they may use the app for a monthly subscription fee of US$ 4.99.

Beyond Vision began as a smart-home project under Tsing-Hua University, then narrowed its focus to eldercare over the course of a year. Besides Victor Lin, who has already 8 years of experience in business, the team also has three other core members, who are all either graduate or doctorate students studying at Tsing-Hua University. The team hopes to recruit more talents to further reduce the three-day identification period.

Since the inception of CarePLUS, Victor is now able to understand the situations his elderly family members face in real-time, which he can see his grandmother watching TV at home through the glimpse of the app screen. This is not only Victor's original vision, but also his first response to the aging society to come.