SEOUL, South Korea, June 4, 2020 /PRNewswire/ -- Ranging from K-pop sensation BTS and Oscar-winning "Parasite", Korean pop culture appears to be having its moment. Combined with ultrafast internet and 5G-powered smartphones, the growing popularity of Korean movie and music has led to an expansion in the country's digital content consumption.

Korea's major credit card company Hyundai Card has introduced 5 key trends shaping Koreans' spending habits on digital content. The result is based on the company's 2017-2019 analysis of its consumer transaction data at 10 digital subscription service providers such as Netflix and YouTube Premium.

The three-year analysis was a part of the efforts to better understand Korean digital content subscribers by Hyundai Card, which has been leading the country's credit card trends with products tailored to customers' lifestyle and extensive digital transformation initiatives. It has developed an artificial intelligence-based chatbot, adopted blockchain for its system and built an advanced algorithm to offer more personalized  customer services and benefits.

For more information about this report visit http://newsroom.hcs.com/front/board/Spending-on-video-streaming-services-grows 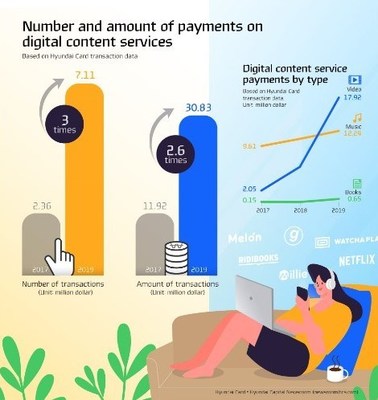 According to Hyundai Card's analysis, its consumers spent some $30.83 million on music, video and e-book subscription services in 2019. It was about 2.6 times more than what was spent in 2017. The number of transactions has tripled over the same period from 2.36 million to 7.11 million.

While Korea is not the only country to witness the expansion of the digital content market, its growth pace has been much faster than global trends. According to Statista, digital content market (excluding games) edged up 1.13 times from $65.46 billion to $73.99 billion between 2017 and 2019, relatively slower than in Korea.

3. No more piracy: Koreans more willing to pay for digital content than ever before

Psychological barriers had been high in Korea for consumption of paid content. People were mostly reluctant to pay for video-on-demand services and were used to downloading pirated films over the internet. Consuming paid digital content was deemed to belong only to tech-savvy young generation.

But this perception has changed. According to Hyundai Card's joint survey with research agency OPENSURVEY, 92.7 percent of the respondents said they have a positive view about spending money on digital content. Of those surveyed, 37.4 percent said their perception has shifted from negative to positive.

4. In a rapidly aging society, the Korean elderly emerge as key consumer group

Noteworthy is the fact that people in their 60s were the most active users of e-book subscriptions. They spent 21 times more on e-books in 2019 than in 2017. Fifty-somethings spent 10 times more on video services over the same period.

"Against the backdrop of recent surge in digital content subscriptions propelled by the popularity of video streaming services," said a Hyundai Card spokesperson. "We took into account changes in consumer spending trend and life style when designing the card, not conventional elements such as their occupation or income. That led to upbeat response from customers."