Dony Garment Co., Ltd. has made a huge effort to contribute 100,000 antibacterial and anti-droplet cloth-masks to the latest medical supplies donation from Vietnamese businesses to the United States.

HANOI, Vietnam, June 9, 2020 /PRNewswire/ -- Dony Garment is a company specializing in producing by order clothes and uniforms, but has shifted to cloth-mask production since the beginning of the pandemic. Total value of its donated cloth-mask is VND 10.5 billion (over 450,000 USD). 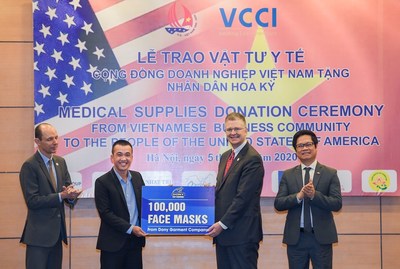 Director of Dony Garment, Pham Quang Anh, (left) and the US Ambassador to Vietnam Daniel Kritenbrink during the medical supplies donation hosted by VCCI, June 5th.

By giving away those masks, Dony said they wanted to express gratitude towards the United States previous support for Vietnamese people during the pandemic.

During a medical supplies donation ceremony on June 5th, Vietnamese businesses had a chance to show their support for the global efforts on COVID-19 fight, when giving away 1.3 million face-masks and about 100,000 non-skid socks to the United States.

Operation USA will be responsible for receiving and distributing the shipment to communities in need to protect the health of the American people during the pandemic.

Pham Quang Anh, Director of Dony Garment, said his company had been significantly impacted by the pandemic, both in good and bad ways, so they understood what kinds of adversity that other firms and people around the world were suffering.

"At a time when the disease is spreading in other countries, including the United States, we want to contribute more to the international community. Since the beginning of the pandemic, we have deducted 5% of Dony's entire revenue, from apparel to cloth masks, to the community."

Besides the revenue deduction, Dony built its goods for donations by encouraging its workers to voluntarily participate in overtime shifts to produce cloth-masks. Unexpectedly, many workers, without being suggested, have dedicated their earnings from those shifts to its COVID-19 Prevention Fund.

Dony's internal services during lockdowns, such as haircuts and manicure, also gained a lot of support from its staff and contributed an ample amount to its fund.

Dony emphasized that their funding activities were not just about fulfilling corporate social responsibility (CSR), but also its way of returning the favors from partners in other countries during this harsh time.

On behalf of Operation USA, the US Ambassador to Vietnam Daniel Kritenbrink has expressed his appreciation towards Vietnamese friends.

The United States currently has the most confirmed cases worldwide (about 1.98 million), while having around 112.000 deaths. The country is struggling to gradually reopen its economy as experts warn that the pandemic prevention and control should not be neglected.

Concerning the US pandemic's situation, the US Ambassador was positive that the United States would successfully make it through, and acknowledged that the help from the Vietnamese businesses and organizations would be a factor in the success.

He also praised Vietnam's victory in COVID-19 prevention and control which plays a crucial role in the nation's economic recovery.

The latest shipment was one of many aids that Vietnamese people, government and businesses have provided not only the United States, but also many other countries to encourage the global efforts to contain the pandemic.

By spreading support for impacted countries and areas during COVID-19, Vietnam has won universal recognition and boosted its reputation in the global stage. This will go on to help Vietnamese businesses establish their identity in other countries.

During the pandemic, Dony has flexibly turned to cloth-mask production to meet the rising demands for protective products around the globe caused by the fear of coronavirus infection. Dony dedicated that successful movement to its US business partners and others, who have maintained steady orders from Dony throughout the crisis.

Thanks to its own strategic turn and support from its partner, the company has managed not only to keep its revenue and production stable even in the outbreak, but also to expand its scale and production. Dony's factory site was 420m2 before the COVID-19, but increases to 1600m2 now.

Dony Masks, the company's key product during the pandemic, has gained prominent certification on quality and safety from Vietnam, French, Germany and the United States. Among those, the REACH Certificate of Compliance from Germany is the most vital document as it certifies that Dony's product is compliant with the EU REACH regulation (EC).

The company's agility has made it one of the winners during this crisis as Dony Masks were exported in large shipments to the United States, Europe, Middle East, Japan and Singapore, etc.

In order to continue its success, Dony has invested hugely on the research and development process. It aims to hit the market with protective gears including clothes, shoes, hats and gloves to promptly serve the need of the current struggle against COVID-19.

Millennials in ASEAN: The Next Growth Engine