SHANGHAI, July 9, 2020 /PRNewswire/ -- Robin Li, the co-founder, chairman, and chief executive officer of Baidu, Inc. (NASDAQ: BIDU), today set out his elaborate vision for the future of AI during a keynote speech at the World Artificial Intelligence Conference (WAIC). Li said that new infrastructure will accelerate the intelligent transformation of various industries, with Baidu playing a key role in this process through its open-source AI platforms that can empower other organizations to adopt AI applications. Li also believes that the development of AI is only in the middle stage of a three-stage historical trajectory, but that AI has already demonstrated its potential to transform economies and societies. 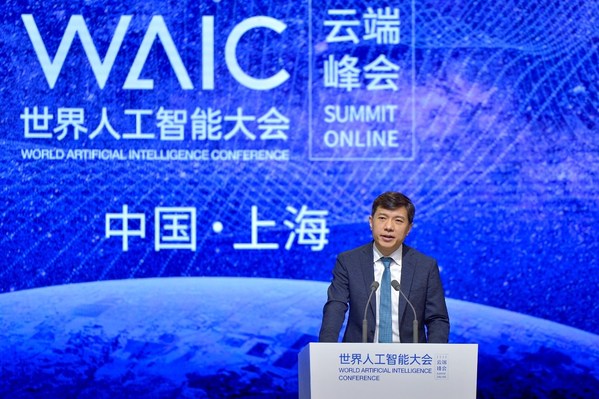 In line with this year's WAIC theme "Intelligent Connectivity, Indivisible Community", Li spoke about the impactful role AI is playing, and will play, in tackling the world's biggest problems, including the COVID-19 pandemic, economic stagnation, and widespread unemployment. Li stated that the ongoing development of new infrastructure will facilitate the widespread application of AI, which will boost efficiency in transportation, energy, health care, and other fields, driving economic growth. Likening it to the U.S. information superhighway concept of the 1990s that ushered in the internet age, Li said that China's "New Infrastructure" plan should be seen as "the largest-scale infrastructure expansion engineering project" for supporting intelligent transformation and "has great potential to bring about comprehensive AI in China."

Li explained that Baidu aims to make a significant contribution to the building of new infrastructure. Baidu has invested heavily in developing AI platforms—such as the deep learning open platform PaddlePaddle, Baidu Cloud, AI open platform Baidu Brain, and the Apollo autonomous driving platform—all of which will enable other organizations to adopt AI applications. Baidu recently announced plans to deploy 5 million intelligent cloud servers by 2030 and train 5 million AI experts in the next 5 years.

"As an AI platform company that is focused on empowering other organizations, Baidu hopes that every enterprise, no matter how small, is able to use capabilities and services provided by our platforms, just like they were water and electricity, to quickly and easily realize intelligent transformation," Li said.

"I believe even more strongly that as AI technology platforms are open sourced, more and more applications can be conveniently developed, benefiting more and more aspects of our society and economy," he added.

Li also pushed back on the rising pessimism about the power of technology, and of AI in particular, comparing the current malaise to that which prevailed in the early 2000s about the internet, before it became universal. "During that period, I never lost faith in the power of the internet—and I feel the same way about AI today," Li said. "I still consider AI as comparable to the big wave of the industrial revolution—AI will definitely change every industry we have today."

Li highlighted the impressive record of existing AI applications in fighting COVID-19, such as Baidu's AI-powered LinearFold algorithm, which has reduced the prediction time of the coronavirus's RNA secondary structure from 55 minutes to 27 seconds, significantly increasing the efficiency of vaccine R&D. He also pointed to Baidu's AI temperature screening system and autonomous vehicles, which have contributed to COVID-19 control work.

In Li's view, these applications of AI are just the beginning of a wider transformation of all industries and societies. "AI development is progressing through three main historical stages," Li explained in his remarks; at present, we are only in stage two. In the first stage, Li said, "AI scholars focused mostly on introducing concepts, technological exploration, and limited applications like playing Go. In this stage, AI had not become an industrial or economic phenomenon."

The second stage is the intelligent transformation of the economy. Along with the rise of the internet and growth of data, AI is starting to play a broader role in several industries. Li believes this specific stage consists of two halves: the first half, which has passed, saw the development of general AI capabilities and platforms; the second half, now underway, is seeing the application and commercialization of AI in more and more sectors, such as search, newsfeed recommendation, autonomous driving, and healthcare. The third and final stage is the intelligent transformation of society, when AI will permeate from economic aspects to wider social aspects.

In line with its vision to empower other organizations to adopt AI, at the WAIC Baidu reached a strategic partnership with Shanghai Pudong Development Bank (SPDB) to accelerate the application of AI in the finance industry. The new agreement will build on their previous achievements in establishing the first laboratory for deep learning in the finance industry, initiating a fintech innovation competition for college students, leveraging Baidu's blockchain to build a new information sharing mechanism, and using AI to develop a virtual customer service platform. Baidu will continue to support SPDB in its digitalization and application of AI, with the goal of achieving the intelligent transformation of finance.

Baidu, Inc. is a leading search engine, knowledge and information centered Internet platform and AI company. The Company's mission is to make the complicated world simpler through technology. Baidu's ADSs trade on the NASDAQ Global Select Market under the symbol "BIDU". Currently, ten ADSs represent one Class A ordinary share.

Skills gap grows wider as COVID and capabilities collide, according to survey by Avado