"This charity event creatively combines endangered wild tiger and intangible cultural heritages, both of which are facing the issue of inheritance and sustainable development," said Liu Peiqi, Director of WWF China Northeast China Project. "We are happy to join hands with a powerful platform like Kuaishou and find that more people are aware of the protection of wild Siberian tigers and even the global wild tigers," added Liu.

"In traditional Chinese culture, the tiger is considered the king of all beasts, symbolizing power, justice, and protection," explained Qi Hang, regional cooperation director of Kuaishou. "As tigers are experiencing unprecedented threats due to illegal trade in tiger parts, we team up with WWF and intangible cultural heritage craftsmen, calling on the public to protect the natural environment and refuse consumption of tiger products." 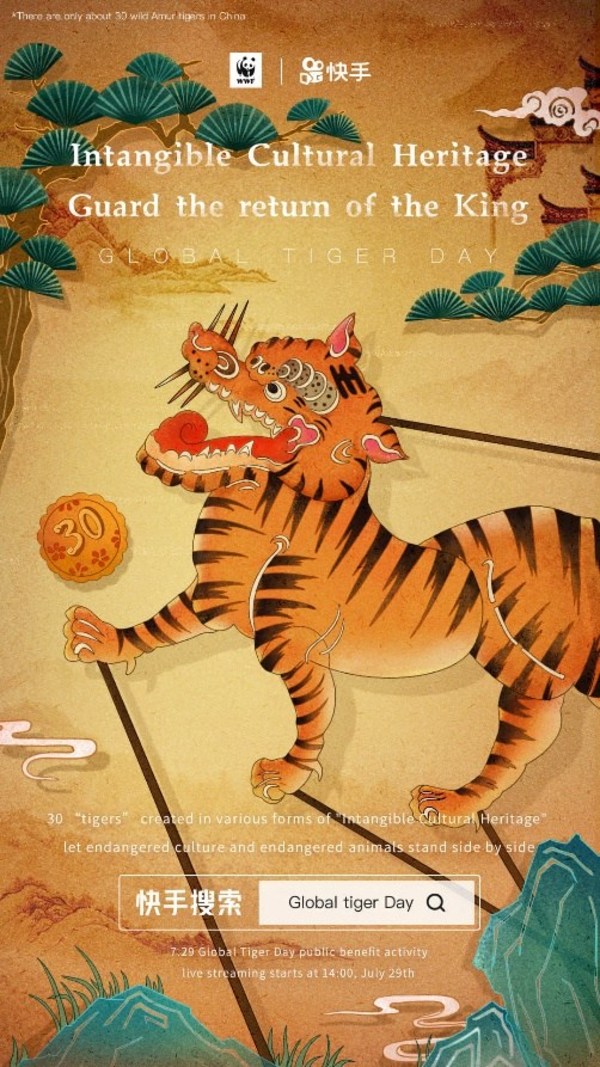 During the live-streaming, WWF introduced how illegal trade in tiger parts threatens the wild tiger population, and reiterate its commitment to protecting the species in the coming years.

WWF's philosophy and commitment received wide popularity on the Kuaishou platform that it wins over 54,000 followers within three days since joining.

WWF, founded in 1961 and headquartered in Gland, Switzerland, is one of the world's largest and most respected conservation organizations, aiming to build a future in which humans can live in harmony with nature. WWF officially joined Kuaishou on July 28. Through charity events co-launched with Kuaishou, WWF aims to increase public awareness of wild tiger protection.

Kuaishou Technology develops content sharing platforms and makes content production, distribution and consumption fast and easy. Our content recommendation system is built on a deep understanding of our users and the content being shared on our platforms every day.

Our flagship product, Kuaishou, is China's leading short video-sharing and social networking platform that enables users to capture the unique and memorable moments of their everyday lives and to interact with followers in real-time. Our technology offers users a highly personalized experience and encourages members from all communities to create and discover exciting and dynamic content.