NEW TAIPEI CITY, Nov. 21, 2020 /PRNewswire/ -- "Christmasland in New Taipei City", the biggest winter festival event in Taiwan has been held for 10 consecutive years and won recommendations from many internationally renowned media for 4 consecutive years. This year, in cooperation with The Walt Disney Company in Taiwan for the first time, "Christmasland in New Taipei City" will put forth the theme of "Disney Fairytales". Visitors are cordially invited to experience a Disney-themed Christmas festival. Not only will the event time be the longest over the years, but the scope of lighting zones will be expanded from New Taipei City Plaza, Banqiao Station Square and Wanping Metropolitan Park to Fuzhong Shopping Area. 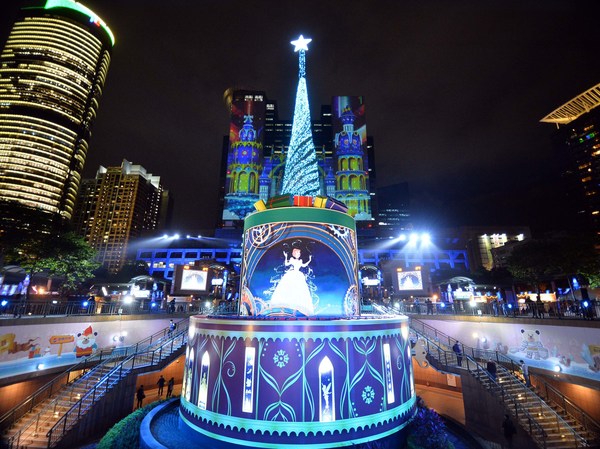 Always a key element in our Christmasland, the 3D projection mapping light show, best known as the largest light show in Taiwan, will feature various characters of Disney Fairytales for the first time this year. Accompanied by the Disney-styled music arrangement, this Disney 3D projection mapping show will be the first of its kind in Taiwan. It will be also unprecedented this year that the performance of the Main Light Show will be linked through LEDs to surround the lighting environment of the entire New Taipei City Plaza to create a 360-degree multi-level stereo sound and light experience.

Colorful Disney-themed lights will be hung up on the sidewalk along New Taipei City Plaza this year. The footbridges around the City Hall will be turned into eight "light bridges" that have been and will be popular with domestic and foreign tourists. For example, the Xinfu Road light bridge will be full of colorful elements from Alice in Wonderland and expected to be a photography hot spot. Meanwhile, "Banqiao Bus Station" will be given a makeover with the components of Disney Fairytales and decorated with pyrotechnic lighting. The station is poised to be a popular Facebook check-in location.

This year's lighting zone area will be extended to cover Fuzhong Shopping Area for the first time. The four major lighting zones will be equipped with 48 art installations in total. Inspired by the well-known fairy tale "Jack and the Beanstalk", the "Magic Bean" main light will be decorated on the stems with crystals, which will look even more dazzling under the night sky. The "Magic Forest" created by magic mushroom-shaped installations and the "Floating Dandelion" inspired by dandelions will unveil a new aesthetic style of Fuzhong Shopping Area which is decorated with cute Santa Bear, making it even more attractive. Designed by the team that has won the Italian Design Award, the "Neverland Plaza" located in Banqiao Station Square will use the design vocabulary of the Fantastic Garden as its main theme, incorporating the whisper of flowers into the art to create a super large outdoor light installation that exceeds the previous scale. Coupled with a gorgeous light show performance, the "Neverland Plaza" is surely one of the hot spots for taking pictures for Instagram this year.