BEIJING, Jan. 11, 2021 /PRNewswire/ -- iQIYI Inc. (NASDAQ: IQ) ("iQIYI" or the "Company"), an innovative market-leading online entertainment service in China, is pleased to announce that its original interactive virtual reality (VR) film Killing a Superstar (the "Film") has been officially launched on Steam, one of the world's largest digital distribution platforms. The Film is made available for viewers to experience through Valve Index, HTC Vive, Oculus Rift, and Windows Mixed Reality devices, representing a significant milestone for iQIYI's global distribution efforts. Now available to nearly 100 million viewers in China and abroad, Killing a Superstar is expected to enhance the influence of China's original VR content on the global stage. 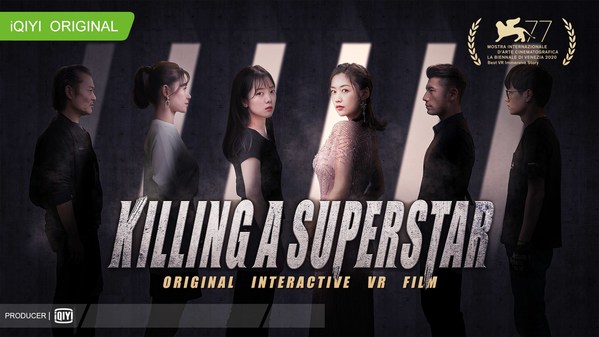 Killing a Superstar was iQIYI's first major immersive VR project in 2020 and the first film in its new VR Interactive Theater content library. The Film tells the suspenseful story of a murder that takes place in a confined space. By adopting multiple parallel narratives and using 360° panoramic shots and multi-viewpoint switching, Killing a Superstar creates a unique and immersive experience.

The story starts in five different spaces in a villa at the same time, and every scene is a single long take. By giving viewers the freedom to switch between scenes whenever they choose, the Film invites them to explore the film's storyline and narrative freely. While watching, viewers can also find hidden clues in the scenes and complete tasks to identify the real murderer, immersing themselves in the interactive world of the Film.

Steam, the world's largest distribution platform, had nearly 95 million monthly active users (MAUs) in 2019, according to its official figures. In July 2020, the proportion of VR players in Steam's MAUs reached a record high of 1.93%.

Following the Film's official release on Steam, viewers worldwide can experience the 360° panoramic 8K VR original interactive content that is powered by iQIYI's technologies. The global distribution of Killing a Superstar not only bolsters the influence of China's original premium VR content in the international market, but also helps establish a vibrant domestic consumer VR content ecosystem, creating a virtuous cycle that propels China's burgeoning VR industry to continue to expand.

Killing a Superstar won Best VR immersive Story Award in the Venice VR Expanded competition at the 77th Venice International Film Festival, representing the first time an original VR production from China's Mainland has received an award from a prestigious international film festival. Based on the success of Killing a Superstar, the Company already has plans to produce another film for its VR Interactive Theater content library with an expected release date of summer 2021. Going forward, iQIYI will continue to optimize the interactive experiences of its VR content, using 360°+8K HD VR technology to create dramas that feature multiple parallel narratives which engage and entertain audiences worldwide.