The 2021 Xiamen Marathon will kick off on April 10 in Xiamen, East China's Fujian province, just after being rated a 2021 World Athletics Elite Platinum Label race in late February.

As one of the top marathons in China, the Xiamen Marathon's success can be primarily attributed to the city's unique natural environment and the local government's continuous efforts to develop an ecofriendly garden city.

Located on the western side of the Taiwan Straits, Xiamen boasts enchanting natural scenery and a pleasant climate and is a popular tourist destination. The Xiamen Marathon course has been hailed one of the most beautiful marathon courses in the world, with the 42.195-kilometer route passing by the best scenery in the city.

Since the Xiamen Special Economic Zone was first established in 1980, the local government has consistently adhered to the philosophy that "clear waters and lush mountains are invaluable assets." More than 140 gardens and over 80,000 hectares of green area have been built across the city, helping it win numerous honors, including the Habitat Scroll of Honour Award, the title of International Garden City, and the title of National Model City for Environmental Protection.

The air quality in Xiamen ranked fourth among the 168 major Chinese cities in 2020. The city also established the first net-zero carbon emission demonstration zone in Fujian province that same year.

This was part of the city's efforts to prevent and control air pollution, which included examining VOC emissions in 103 major companies, overhauling 748 heavily-polluting companies, and reducing flying dust at 180 construction sites.

In addition, government departments spent 114.05 million yuan ($17.40 million) improving the water environment, with 100 percent of water in major water bodies meeting national quality standards. Regular monitoring has also been carried out on 400 marine outfalls, and the city's sewage treatment capacity has exceeded the annual goal of 500,000 metric tons per day.

The city's ecological restoration efforts also proved successful last year. For example, around 83 hectares of mangrove forest were planted, and the city's water loss and soil erosion rate was reduced to 5.44 percent. Its nature reserves were expanded to 13,897.38 hectares, 423.38 hectares more than expectations.

More than 20 endangered Chinese white dolphins were seen in the sea near Haicang Bridge in Xiamen on Jan 31. Incomplete statistics show that the rare dolphin was observed in Xiamen 27 times in January, indicating an increase in their population.

Xiamen enjoys 355 square kilometers of sea area and a 194-kilometer coastline and is home to more than 2,000 types of marine organisms, including 12 endangered species, such as the Chinese white dolphin and lancelet, which live in the 75.88-sq-km national nature reserve for rare marine species.

The reserve has been improving its management by strengthening scientific and technological support, enhancing law enforcement, promoting science education, and facilitating international and regional cooperation, said Yu Xingguang, former director of the Third Institute of Oceanography of the Ministry of Natural Resources.

Statistics from the Xiamen bureau of natural resources and planning showed that the number of Chinese white dolphins off Xiamen's coast has been steadily increasing from about 60 in the early 1990s to more than 80 in 2020. The area has also become a unique geographic location in need of protection.

A garden city powered by reform

In 2016, the Xiamen government entrusted the Institute of Geographic Sciences and Natural Resources Research of the Chinese Academy of Sciences to formulate a tailored plan for the city's environmental protection reforms.

The city has launched a series of innovative protection and restoration projects for the ecosystem over the past few years, including carrying out a "cross-island" development strategy, protecting biological diversity, and piloting the construction of a sponge city. Its success in promoting the reform and modernization of environmental protection is being studied by other cities across the country.

In December 2020, Xiamen led local governments in China in developing an independent accounting system for measuring the value of ecosystems. It mainly involves services for relaxation and the capacity to maintain and expand biodiversity.

The indicators not only directly reflected the ecological benefits at the municipal and district levels, but also revealed changes over years, which has helped local governments at all levels improve their work.

In addition, Xiamen has improved the applications of this system by setting up an evaluation system for national demonstration cities for environmental protection and a management mechanism for the development within the ecological deadlines, pushing forward the transformation of lush mountains and clear water into invaluable assets. 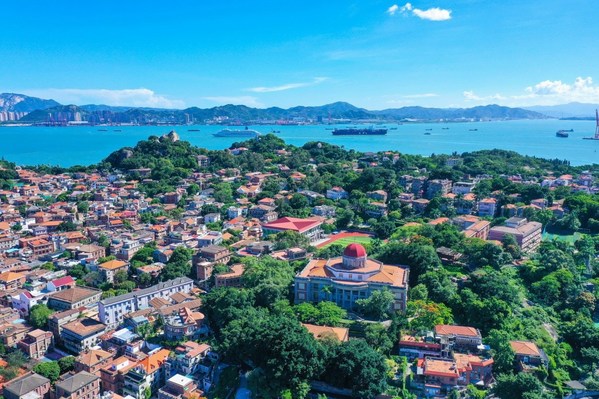