The Lighthouse that Leads Missing Children to Safety 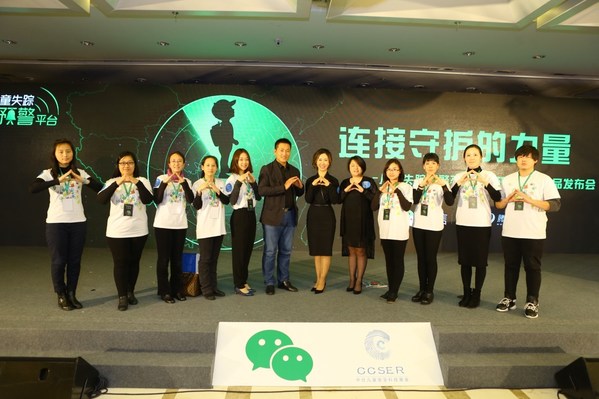 The various awards selected by the World Brand Evaluation Center each year are regarded as one of the few top honors by many business and academic professionals around the world. It is reported that Bill Gates, founder of the Bill and Melinda Gates Foundation, and Anthony Franco, the founder of the Open Insulin Project, also received this award as project leaders.

Today, missing children are a global problem. In many cases, children will suddenly disappear or even be kidnapped under normal living conditions. Even babies who have just learned to walk are not safe. In countries with areas in development and a large population, like China, it is extremely difficult for ordinary families to immediately send messages asking for help about missing youths.

In the United States, there is a well-known missing child alert system—AMBER Alert. This alert began in 1996 and has a history of 25 years. From highway displays to today's mobile phone alarms, AMBER Alerts are still in use today.

In China, a nationwide missing child alert system has always been missing in its history. It was not until Zhao Li appeared that this situation began to gradually change. In 2015, Zhao Li donated two million RMB to create an innovative public welfare project called China Child Safety Emergency Response (CCSER). Driven by the idea of combining scientific and technological innovation with human care, Zhao Li invested a second payment of two million RMB to develop advanced mobile phone software for early warnings and alerts of missing children for CCSER.

Zhao Li and Zhang Yongjiang have also worked hard to establish a three-in-one (early warning, alarm, and search) information release system and have collaborated with millions of offline volunteer groups to create a child disappearance alert system covering the entirety of China. A major innovation to CCSER's system is the use of technology that allows users and volunteers to accurately obtain information about missing children. Details will be sent out based on the distance between users, volunteers, and the location where the child has been reported missing, and the accuracy of the information will be reviewed by CCSER staff while the latest developments will be readily provided.

Although she was inspired by the United States' AMBER Alert, from the very beginning, Zhao Li had established a unique system that was different from preexisting and foreign missing child information release and search mechanisms. She discovered that current AMBER Alerts in the United States have three drawbacks: 1. The range of information sent is not accurate enough. Released details on highways' electronic display screens make information release too broad, and many people who aren't aware of the situation receive the information as well. 2. Too little information is released. Only two pieces of information, such as the fact that there is a missing child and a license plate number, will be provided. Once the criminal changes cars or removes their license plate, searchers will lose their trail on the kidnapper. 3. The alert serves as only one step that does not inform people of the search's result. In other words, people who see information about missing children will never know if the child has been found.

After analyzing this situation, the system and software development team led by Zhao Li combined elements of mobile network communication based on existing functions of the same types of platforms and "emphasized important effective factors and removed relatively ineffective aspects." Innovation and change. First, the system she developed enables the "information exporter" to directly transmit the most detailed information on the missing child to the "information recipient" in one go, actualizing "accurate initial information transmission." Secondly, she led the system development team to use GIS geographic information technology, combined with a series of big data such as walking speeds, driving speeds, and high-speed rail speeds to develop a unique information push mechanism for missing children. Using this mechanism, the CCSER platform will accurately send relevant early warning messages to the surrounding area in certain time intervals, centering on the location where the child went missing. During the "three-hour prime search period" after the child has been declared missing, three "protection circles" with a radius of 30 kilometers, 90 kilometers, and 690 kilometers will gradually be formed. After three hours, information about missing children will quickly cover the whole country. Finally, when the missing child is found, the CCSER platform will close its early warning after verification and inform volunteers that the missing child has been recovered, effectively avoiding miscommunication between the early warning issuer and volunteers that repetitive, invalid, or wrong information feedback can cause. This unique information push-and-recover mechanism is vividly referred to by Zhao Li and her team as a "closed-loop water ripple" communication system. At the same time, this unique system also constitutes as a new model of "precise communication" to find missing children. Because of its precision, CCSER has recovered thousands of missing children in the six years since its establishment. The application of these original technologies also makes CCSER an international leader in numerous important aspects.

To improve the CCSER system, Zhao Li realized that to further build the scope of their online platform, it is necessary to cooperate with offline agencies to protect children to the greatest extent. So Zhao Li led her team to cooperate with a number of well-known chain companies (Lianjia Charity, Tiantian Chain, FAW Audi, etc.) to establish nearly 30,000 offline child guard stations, truly ensuring that every child out in public can feel that "when you are in danger, you can easily find a safe haven."

Today, after six years of practice and continuous improvement, Zhao Li and her team have successfully established 26,248 offline child guard stations, organized 5,118,087 volunteers, and issued 2,159 missing child warnings with 1,072 children that were recovered.

In early 2020, Zhao Li went to the International Centre for Missing & Exploited Children (ICMEC)'s headquarters in Washington, USA to meet with Caroline Humer, the director of the organization, and Carly Tapp, the program specialist of the National Center for Missing & Exploited Children (NCMEC, the agency that sends out AMBER Alerts). Together, they discussed how to use their respective advantages to better help missing children in various countries. In more than three hours of conversation, the two major organizations expressed their appreciation for CCSER's innovative technology, new communication modes, and its patented software while expressing a strong willingness to cooperate. The person in charge and technical commissioner of NCMEC in the United States was even more surprised at the efficiency of Zhao Li's early warning platform and its achievements in just five years.

When asked about her original intent in creating CCSER, Zhao Li said that the idea stemmed from her own experience. In 2014, her three-year-old son was almost lost. When her son had returned by himself, she deeply felt the worries of being a mother when she thought her child had disappeared. From then on, she hoped to help the families of missing children in some way. She said: "It is worthwhile although we only help one family. This is our due responsibility. After more than six years, we should also look to broadening CCSER's scope internationally, perfecting our platform, and letting the world know more about CCSER."

Due to her outstanding contributions in recovering missing children, Zhao Li won the title of Person of the Year at the 11th China-US Business Summit in October 2020. This year, she won as one of the 2020 Top 10 Global Innovative Public Welfare Leaders by the World Brand Evaluation Center. It is worth mentioning that Zhao Li is the only Chinese individual who has won this honor since the award was founded in 2009.

To this day, the problem of missing children around the world is still serious. In the past six years, Zhao Li and her team have established and continuously improved their system for early warnings for missing children, which has greatly increased the probability of successfully recovering youths who have disappeared. With their day-to-day efforts, more and more lost children can reunite with their loved ones. We have reason to believe that Zhao Li, this incredibly caring and dedicated Chinese mother, has become a beacon for missing children looking for their way home. We also believe that Zhao Li's system and the valuable experience she's accumulated in practice can benefit even more countries, especially children in developing regions.