SEOGWIPO, South Korea, June 25, 2021 /PRNewswire/ -- An annual international peace forum kicked off on the southernmost island of Jeju on Thursday to discuss climate change, the COVID-19 pandemic and paths to sustainable peace. 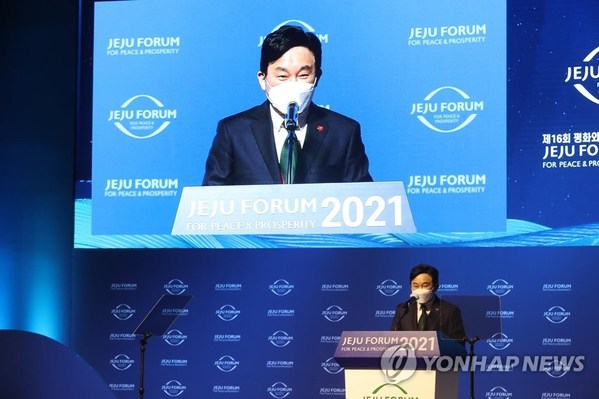 Jeju Gov. Won Hee-ryong speaks during the 16th Jeju forum on peace and prosperity in the city of Seogwipo on South Korea's largest island of Jeju on June 25, 2021, the 71st anniversary of the outbreak of the 1950-53 Korean War.

The three-day Jeju Forum for Peace and Prosperity brings together more than 2,000 participants from about 50 organizations and institutions in 30 countries in an online-offline hybrid format due to the pandemic situation, the Jeju Peace Institute think tank hosting the forum said. Most of the key sessions will be livestreamed via YouTube.

Under the theme of "Sustainable Peace, Inclusive Prosperity," dozens of prominent figures and experts have been invited to give speeches and take part in the sessions, including former French President Francois Hollande, former U.N. Secretary General Ban Ki-moon and Nobel laureate Abhijit Banerjee.

On Thursday, the forum started off with a "youth" panel session involving Jeju Gov. Won Hee-ryong and Banerjee, a professor at Massachusetts Institute of Technology (MIT), speaking with a group of students about inequality and inclusive prosperity.

On Friday, Ban and Hollande will lead a session to discuss cooperation and leadership to tackle climate change under the pandemic era.

Moon Chung-in, a former adviser to President Moon Jae-in, will join a session with former Ambassador to U.N. Kim Sook and ex-Foreign Minister Gong Ro-myung to look back on the 1991 South Korea-Soviet Union summit and discuss its legacy in light of peace and security..

A roundtable of current ambassadors of Egypt, the United Arab Emirates, Israel and others will be held to discuss peace in the Middle East.

The forum will be followed by another session with foreign ambassadors, including Ambassadors of Japan, France, India, Australia and Singapore.

As June 25 marks the anniversary of the outbreak of the 1950-53 Korean War, there will be a visual presentation of interviews of war veterans recounting their experience.

Since its launch in 2001, the forum has grown into a regional multilateral dialogue platform for promoting sustainable peace and prosperity on the peninsula and beyond.

Youth Square attracted over 1,000 participants to join a series of street dance activities

SHAREit Powers Ahead: clinches top spot amongst the fastest-growing media publishers in North America and second spot in Latin America