QINGDAO, China, July 20, 2021 /PRNewswire/ -- On July 16, 2021, organized by the Information Office of the People's Government of Shandong Province, a delegation of journalists from foreign media organizations who were participating in the 2021 Qingdao Multinationals Summit (QMS) paid a visit to Qingdao Weida Biotechnology Co., Ltd., a Chinese manufacturer and supplier of disposable protective clothing and medical face masks. Within just 36 days of the first official warning concerning the new and dangerous pathogen, Weida, traditionally a maker of school uniforms, had quickly retooled all its production lines and jumped into the manufacturing of PPE and epidemic prevention supplies. The company has now become a large-scale PPE maker operating within the confines of a 1,600 square-meter 100,000-level germ-free purification workshop, with a daily production capacity of 12,000 pieces of medical protective clothing and 1.2 million masks. 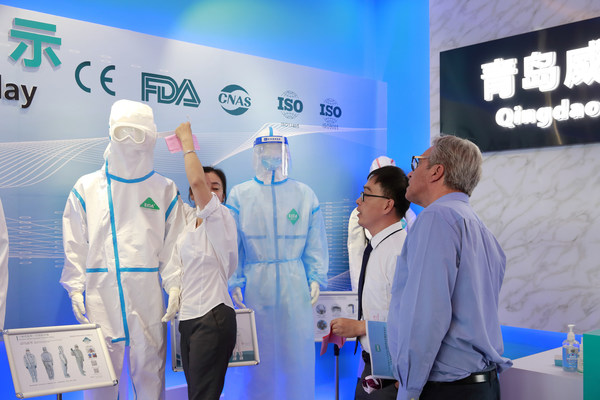 In April 2020, Weida designed and started producing a highly comfortable protective overall made up of protective clothing, a pair of goggles and a mask after realizing that it was quite inconvenient for medical staff to put on and take off traditional protective gear with poor breathability as well as the separate set of goggles and mask that could easily leave marks on the face. Compared with traditional offerings, the protective overall extends the effective protection time from four hours to eight hours and reduces the number of individual pieces that make up a complete set from 15 to 7 while shortening the time required to suit up and later remove the outfit from 27 minutes to 9. The company has obtained six patents for the protective product based on its advantages, including virus isolation, a high level of air and moisture permeability, the wide window, no facial marks, anti-fog lens and a design that makes it easy to put on and take off.

In March 2020, Weida received approval from the United States Food and Drug Administration and the CE Mark in Europe to export medical masks and isolation gowns to Europe and the US. Notably, the firm's EIDA protective suits, isolation gowns and masks have been exported to 57 countries and regions worldwide, including Canada, France, Italy, Japan, Spain, the UK and the US.

Weida's protective suits, isolation gowns, masks and protective masks have become the preferred choice for the frontline workers at a number of public organizations across China, including the 301 Military Hospital in Beijing, airports in Qingdao and the mobile cabin hospitals in the Xinjiang Uygur Autonomous Region.