HARBIN, China, Sept. 18, 2021 /PRNewswire/ -- China Harbin Summer Music Festival, one of the top three music events in China alongside ones held in Shanghai and Guangzhou, kicked off to the sonorous melodies of a Chinese-style symphonic chorus extolling economic revitalization and modernization drive of Northeast China in the Harbin Grand Theater on September 15. 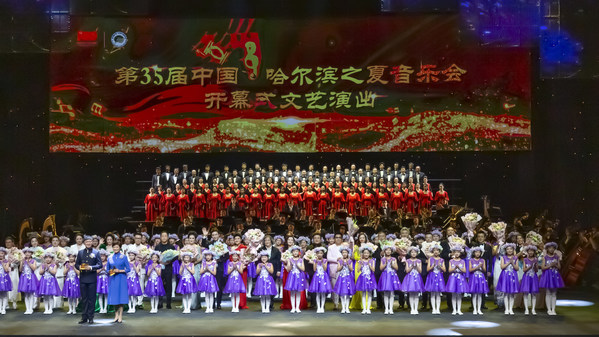 An art performance at the opening ceremony of the 35th China Harbin Summer Music Festival.

The music festival, the 35th of its kind, features an opening gala, public cultural activities, national performance tours, theme forums, art activities and series concerts among others and will last until late November.

Initiated in 1961, the 60-year-old Harbin Summer Music Festival has developed into an internationally renowned and influential cultural event. In the past few years, each edition staged close to 1,000 performances involving more than 10,000 people in the cast and attracting millions of spectators. Now it is an icon of Harbin, capital of northeast China's Heilongjiang Province.

Another recent feature of the music festival is that it is becoming increasingly international, serving as a musical gateway to the world. Over the past years, it has attracted artists and performing troupes from 37 countries and regions including the United States, the United Kingdom, Russia, Israel, Japan and South Korea. It has also hosted solo concert by Sarah Brightman, piano recital by Richard Clayderman, performance of the Israel Philharmonic Orchestra headed by Zubin Mehta, and world-famous opera Turandot, bringing the charm of music from around the world to the Chinese audience.

CGTN: Hong Kong to start a new chapter after 25 years of prosperity