HSINCHU, Dec. 18, 2021 /PRNewswire/ -- On December 1, ARTERY officially introduced two ultrahigh performance MCU, AT32F435 and AT32F437 series, whose main frequencies are up to 288MHz. Based on the existing mainstream and value product line, they extend the high-performance product line and further enrich the product layout of AT32 MCU. 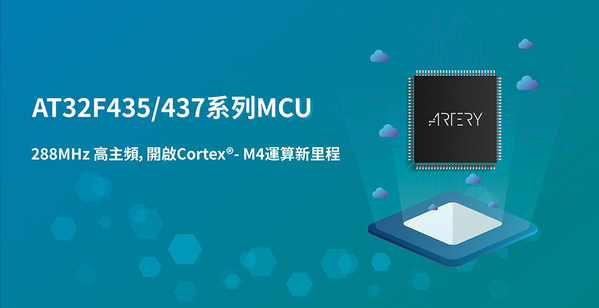 As the first high-performance MCU in the AT32 MCU family, the AT32F435/437 series adopts the state-of-art 55nm manufacturing process. Powered by the ARM® Cortex®-M4 core, it has brought about up to 288 MHz computing speed to the world and maximizes the processing power of the M4 core. It supports up to 4032 KB Flash memory and 512 KB SRAM. Featuring an  single internal-precision floating-point unit (FPU), digital signal processor (DSP), and memory protection unit (MPU), it is far beyond its counterparts in terms of performance, undoubtedly serving as the best partner for applications that require higher computation and larger memory including industrial automation, motor control, IoT and consumer electronics. 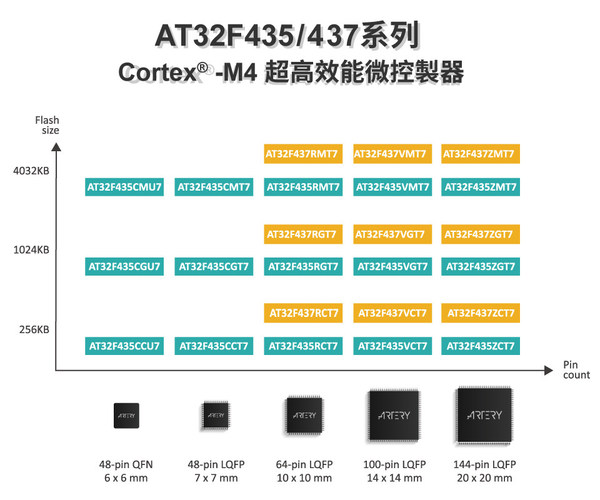 At32f435/437 series supports an industrial-grade chip operating temperature range -40° to 105°. Powered by 2.6V to 3.6V, it offers three power-saving modes--sleep mode, deep sleep mode, and standby mode, so that users can choose between CPU performance and power consumption to meet the low power consumption requirements that credited the product with the edge of high energy efficiency ratio.

At32f435/437 series is provided with sLib (Security Library) developed by ARTERY. This library is a defined area protected by a code in the main memory so that solution providers can not only program the core algorithm in it with great peace of mind but also provide downstream customers with room for secondary development.

AT32F435 series offers 15 product models, including QFN48, LQFP48, LQFP64, LQFP100, LQFP144, and other five package forms to choose. AT32F437 series provides 9 product models, supporting LQFP64, LQFP100, LQFP144, and other three package forms. At the same time, the base pins are compatible with all the products of ARTERY, which are convenient for customers to develop and upgrade based on the existing system.

To meet the requirements of IoT application development and to realize the data transmission function, AT32F437 series adds the media access control (MAC) that is compatible with IEEE-802.3-2002 and provides Ethernet LAN communication which is especially suitable for IoT applications through industry-standard media independent interface (MII) or reduced media independent interface (RMII).

At32f435/437 series is equipped with a complete and rich firmware library, including new development boards like AT-START-F435, AT-START-F437, and AT-SURF-F437, hardware resources like AT-Link- Family programming and debugging tools, BSP standard library, software resources like ICP/ISP programming tools. In addition, it supports IDE platforms such as Keil, IAR, eclipse, RT-Thread Studio, and OS/GUI platforms such as Rt-Thread OS, FreeRTOS, and LittlevGL. All the above aspects provide developers with convenience, greatly shorten the development and mass production time, and accelerate the time-to-market.

At present, AT32F435/437 series products have started to send samples and are expected to be officially put into mass production in January 2022. In the future, ARTERY will continue to improve the existing mainstream, value, and high-performance MCU product lines and will launch low power consumption product lines later.

The full series of MCU adopt cutting-edge 55nm technology, and equipped with 32 bit ARM Cortex®-M4/M0+ core and self-developed sLib; they support secondary development and wider chip operating temperature range of -40° to 105°. AT32F413 series MCU has been adopted and mass-produced by top3 domestic automobile manufacturers; AT32F415 series MCU with its USB OTG interface expands the new era of value USB applications; AT32F403A series with 240MHz high-speed CPU brings unparalleled efficiency and rich peripheral experience; AT32F407 series with 240MHz high-speed CPU is integrated compatible with IEEE-802.3 10/100Mbps Ethernet port controller and suitable for IoT applications; AT32F421 series MCU is the most cost-effective MCU product in the industry with the main frequency up to 120MHz, supporting up to 64 KB Flash memory and 16 KB SRAM; AT32F435 and AT32F437 series MCU introduced in Q4, 2021, create the highest CPU frequency of 288MHz computing performance in M4 industry. As for the AT32F425 series and AT32L021 series MCU that are about to be introduced in the upcoming 2022, AT32F425 will continue to expand the value MCU product line, remaining the cost-effective choice of USB OTG chip. AT32L021, as the first low power consumption product released, is the best choice for entry-level low power consumption MCU.