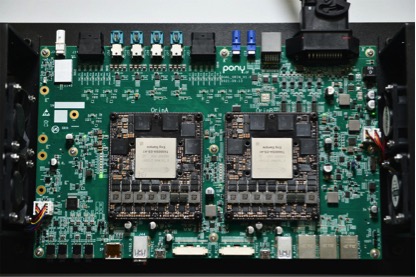 Through in-depth cooperation with NVIDIA, Pony.ai said that it has achieved moving its computing units from industrial level to vehicle level, enabling the company to have the ability to apply autonomous driving technology from basic functional level to more sophisticated applications.

With the support of vehicle-grade computing units, Pony.ai is promoting the mass production of next-generation autonomous driving software and hardware systems to accelerate the large-scale deployment of L4 autonomous driving technology.

Pony.ai has started to use NVIDIA DRIVE Orin for road testing and its software system has been able to run on Orin in real time with low latency. The new computing unit will begin mass production by the end of 2022, said the company.

The DRIVE Orin system-on-chip has a computing power of 254 TOPS, and is supported by CUDA® parallel computing architecture and deep learning accelerator (NVDLA), making it possible to mass-produce high-performance hardware for autonomous driving.

The new computing unit has extremely low latency, powerful performance and high reliability. Pony.ai has developed a variety of computing unit solutions with different chip configurations, based on one or more NVIDIA Orin SoCs and automotive-grade NVIDIA Ampere architecture GPUs, which can meet the needs of both autonomous passenger vehicles and autonomous commercial vehicles.

"We and NVIDIA’s strong alliance has brought Pony.ai one step closer to the company’s vision – to create safe, advanced and reliable autonomous driving technology," said Peng Jun, co-founder and CEO of Pony.ai.

As early as 2017, Pony.ai established a partnership with NVIDIA and used the NVIDIA DRIVE platform for the first time. From May 2021, Pony.ai and NVIDIA begun to cooperate in the development of an autonomous driving computing unit based on the Orin chip, which has accelerated the hardware development process of Pony.ai.