SEOUL, South Korea, April 9, 2022 /PRNewswire/ -- Samyang Foods announced on April 8 that it will participate as the main sponsor of BTS PERMISSION TO DANCE ON STAGE – LAS VEGAS, commemorating the 10th anniversary of the launching Buldak, Korean noodles with secret spicy sauce. 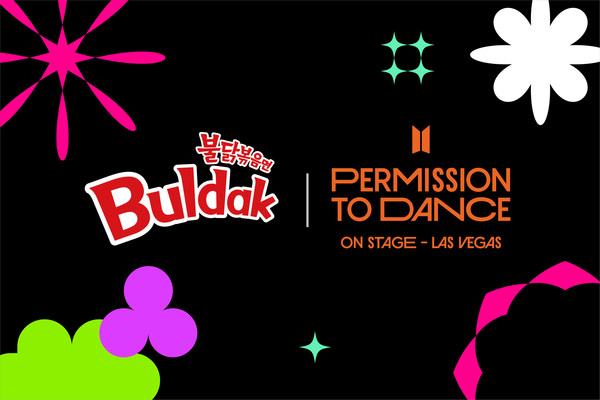 BTS is holding BTS PERMISSION TO DANCE ON STAGE - LAS VEGAS on April 8 to 9 (local time) and on April 15 to 16 at the Allegiant Stadium in Las Vegas.

During the concert, Samyang Foods plans to promote Buldak to fans around the world who love K-culture, and carry out various promotions.

First, a Buldak promotional booth will be operated during the BTS Permission to Dance on Stage – Las Vegas period. The 10-year-history since the debut of Buldak will be introduced and the event in which fans can directly participate will be held. The English advertisement Firely and Greatly released in Korea and China, will be shown to local fans at the concert. In addition, the Samyang Foods Buldak logo is included as an official sponsor on limited edition BTS swags and photo cards of the group members.

In particular, the Buldak promotional booth will reveal a work that reinterprets the value of Buldak from the perspective of the millennials and Generation Z through SAMBYPEN (Se Dong Kim), a K-illustrator known for collaborating with brands like Louis Vuitton and Nike.

Buldak, launched in 2012, is the best contributor to Samyang Foods' exports. Through Korea's representative spicy taste, Buldak has become a trend beyond simply noodles, and a strong fan base has been formed globally. Buldak has also earned a reputation as a video content, going beyond just a single product. In fact, as an icon of a challenge that anyone should try at least once, if you search for 'Fire Noodle Challenge' on YouTube, more than a million videos are found. At the 58th Trade Day Commemoration ceremony in Korea, Samyang Foods was awarded the 300 million Dollar Export Tower for the first time in the Korean food industry, in December last year.

An official from Samyang Foods said, "Participating BTS Permission to Dance on Stage – Las Vegas as the main sponsor is a great opportunity to introduce Buldak representing K-spicy to ARMY (the fan club associated with the band BTS) as well as to consumers around the world." He added, "We will continue to make every effort through Samyang America, which was established last year, so that Buldak can successfully settle into the US mainstream."