JAKARTA, Indonesia, May 28, 2022 /PRNewswire/ -- Indonesia's Ministry of Communications and Informatics (MCI) through the National Digital Literacy Movement (GNLD) Siberkreasi has collaborated with LALEILMANINO and JKT48 to launch their newest digital literacy campaign, #BeraniBersuara. With easy-listening song lyrics, this campaign aims to educate young people in Indonesia, especially Generation Z (Gen Z) to be wiser in using social media, so as to create a positive, ethical, and safe digital creative space. 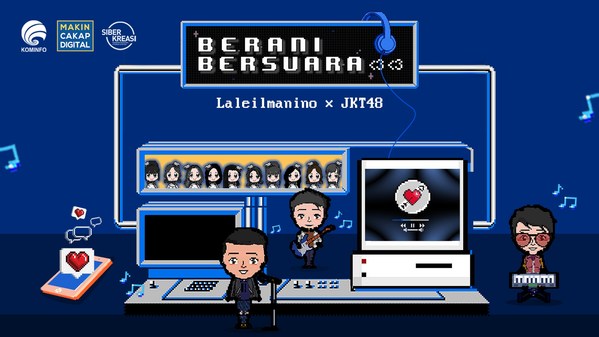 As part of this campaign, LALEILMANINO beautifully composed a song called "Berani Bersuara <3<3" which will be launched on May 27 and will be performed by the popular teen idol group, JKT48. The launch of this song will be followed by the "Duet Bareng JKT48" campaign which invites Gen Z to sing a duet with JKT48 and Laleilmanino on social media such as Instagram and TikTo. The lyrics of the song aims to build a sense of togetherness and connect with Gen Z.

"We believe music is a very great medium to remind us of the positive values we often forget. With an arrangement that is quite upbeat and cheerful, we hope listeners will understand the serious message we are trying to convey, if packaged in entertaining lyrics. The title with <3<3 emoticons is a wordplay of hati-hati, which can mean 'double hearts' or 'to be careful' in Bahasa. It sounds playful but the meaning is deep, " said Nino, a member of LALEILMANINO.

On the other hand, JKT48 expressed their hope that Gen Z can show character in the digital realm. "Young people and Gen Z are looking for entertainment and role models on social media. Through music and dance movements, we want to be able to touch people's hearts, especially the younger generation in Indonesia," said Sheni [one of JKT48's personnel as spokesperson].

The launch of this campaign is carried out close to the Indonesian National Awakening Day which falls on May 20, and in accordance with President Joko Widodo's directives to continue to awaken the creative spirit of Gen Z  in Indonesia to create positive contents and innovate on digital platforms.

Statistics from Business of Apps in 2020 show that 98% of Gen Z own a smartphone with TikTok and Snapchat available on their mobile. On average, they spend about 4.1 hours a day using online applications in addition to time spent on playing online games.

Despite being very active on social media, Indonesian netizens ranked last in the Digital Civility Index 2020 amongst other countries in the Asia Pacific region, with 76 points, making Indonesians with the worst attitude in the digital world. The suspected reasons for this decline is the massive spread of hoaxes, fraud and hatred that are easily found and shared digitally among the Indonesian people.

"Seeing this condition, we hope that the #BeraniBersuara campaign will not only educate and inspire Indonesian Gen Z to create interesting content, but also help them understand the importance of playing social media wisely and ethically, as well as keeping away from hoaxes, fraud and cyberbullying," said Rizki Amelia, Coordinator of Digital Literacy at the Ministry of Communication and Informatics.

As a group of musicians who care about ethical digital literacy, LALEILMANINO said, "Although we are happy that everyone has become more courageous in expressing themselves, we can still find links or comments that are submitted unethically. We hope that this song can provide entertainment with lyrics that inspire Gen Zs to create only good communication in Indonesia."

About the Indonesian Ministry of Communications and Informatics

The Ministry of Communications and Informatics of Indonesia through Ditjen Aptika has the primary function of spreading and developing the national digital infrastructure to accelerate Indonesia's digital transformation.

The Ministry is working with National Digital Literacy Movement Siberkreasi as its partner to provide education on digital literacy to the broader public through various forms of media. This movement focuses on using digital literacy to elevate the national capability and further the Indonesian people.

SM invests in growth through expansion to reach more communities