TAIPEI, Taiwan , June 19, 2022 /PRNewswire/ -- After the 2014 and 2016 winners for the Tang Prize in Biopharmaceutical Sciences were crowned the Nobel Prize in 2018 and 2020 respectively, this category has continued to garner much attention worldwide. After much waiting, names of the latest winners were finally announced at ten (GMT+8) in the morning of June 19. This year's award went to three scientists who played a critical role in the development of SARS-CoV-2 mRNA vaccines: Katalin Kariko, Drew Weissman, and Pieter Cullis, "for the discovery of key vaccinology concepts and approaches, leading to the successful development of mRNA-based COVID-19 vaccine," according to the selection committee's citation. 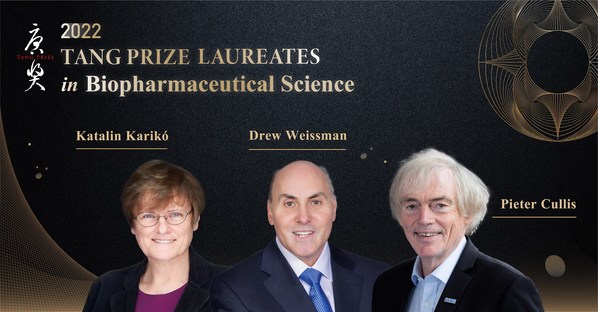 Since November 2019 when the pandemic began, COVID-19 has been disrupting everyone's life for more than two years, posing a grave threat to human health and life, and causing severe damage to the global economy. The World Health Organization's statistics show that up to the moment, more than 530 million COVID infections and about 6.3 million deaths have been recorded around the world. Fortunately, it took Pfizer/BioNTech and Moderna less than 12 months to successfully develop vaccines against SARS-CoV-2. As a result, millions of lives have been saved, to which the groundbreaking contributions made by these three laureates cannot be ignored. While Dr. Kariko and Dr. Weissman found a way to reduce the immunogenicityi of mRNA, Dr. Cullis is credited with designing lipid nanoparticles for the delivery of mRNA vaccines.

There are two major challenges when it comes to delivering RNA into the human body. First, RNA triggers innate immune responses. Second, it is easily degradable, and hence difficult to reach the target cells or organs. The new platform developed by these three scientists is a nucleoside-modifiedii mRNA-based vaccine that can evade the immune system, thus preventing the severe inflammation which occurs when in vitro-transcribed mRNA is recognized by immune cells. These mRNA molecules are encapsulated in lipid nanoparticles and delivered effectively into the cells. They then instruct the cell's machinery to produce harmless pieces of spike protein found on the surface of the coronavirus and initiate a series of adaptive immune responses such as triggering B cells to produce antibodies and training T cells to attack infected cells

The breakthrough discoveries of the three laureates and the ingenious approaches they pioneered are key to the rapid and successful development of the SARS-CoV-2 vaccines. These techniques not only revolutionized vaccinology but also signaled a paradigm shift in protein therapy. They represent the advent of a new era of RNA-based therapies. Unlike traditional methods that take a long time and a lot of money to develop vaccines, these new mRNA techniques turn cells into factories where proteins that serve as antigens or therapeutic molecules can be produced. Mass-manufacturing vaccines at relatively low cost became possible. Moreover, they can be applied to tackle a variety of diseases, such as to the development of vaccines against other viruses, of tailored-made vaccines against cancer, of vaccines against HIV, or even of vaccines against allergic diseases.

Dr. Kariko was educated in Hungary and moved to the US in 1985. She was especially interested in RNA and its chemical synthesis for efficient protein expression in cells in vitro and in vivo. With systematic rigor, she has solved several problems related to the use of RNA in vaccinology and therapy. During the 1990s, as a research associate professor at the University of Pennsylvania, she devoted herself to the development of in vitro-transcribed messenger RNA (mRNA) for protein therapies. For that, she needed to understand the mechanism of the immune response mediated by RNAs. Together with her colleague, Dr. Weissman, she showed that mRNA is recognized by Toll-like receptorsiii, thus participating in the innate immune response, and the injection of mRNA into animals caused severe inflammation. However, they found that if the nucleosides of the mRNA were modified like selected nucleosides in naturally occurring RNA, the mRNA did not elicit such responses. Eventually, they were able to identify key modifications. This critical finding enabled them to create stealth RNAs that do not cause inflammation. Since 2013, Dr. Kariko has been associated with BioNTech RNA Pharmaceuticals, first as a vice president and as its senior vice president in 2019. She was also involved in the development of its COVID-19 vaccine.

Dr. Weissman is the Roberts Family Professor in Vaccine Research at the University of Pennsylvania, where he started his laboratory in 1997 to develop vaccine against HIV. Prior to that, he worked at America's National Institutes of Health (NIH) on HIV-related research. In collaboration with Dr. Kariko, he started studying RNA as vaccines. In 2005, they published their pivotal discovery that nucleoside-modified RNAs are non-immunogenic. Since then, Dr. Weissman has been actively engaged in the application of this technology to the development of RNA vaccines against infections by viruses such as HIV and Zika virus. The collaboration between Dr. Weissman, an immunologist, and Dr. Kariko, an RNA technology scientist, led to many significant discoveries. Together, they hold the U.S. patent for the application of the non-immunogenic, nucleoside-modified RNA that built a strong foundation for the development of Pfizer/BioNTech and Moderna covid-19 mRNA vaccines.

Dr. Cullis, who has a PhD in physics, is a pioneer developer of lipid nanoparticles and a professor at the University of British Columbia. He is also a leader in the studies of membrane structure and function at the molecular level for the development of effective therapeutic agents. He created nanoparticles composed of pH-sensitive, cationic lipids that can induce the formation of non-bilayer structures and can carry DNA and RNA-based anionic macromolecules. Therefore, we can get these nanoparticles to encapsulate and store nuclear acid-based drugs as well as release them into cells. This is critical in the development of RNA-based vaccines, as RNA is quite unstable and difficult to be efficiently delivered into cells. Dr. Cullis has focused mostly on the roles of lipids in membranes by using model membrane systems which helped give birth to engineered liposomal nanoparticulate (LN or LNP) systems that can deliver conventional and nucleic acid-based drugs. His classical papers have been cited for more than 2000 times each, and a great percentage of FDA-approved or emergency medical usage of lipid nanoparticles have relied on the technology he invented. With his novel technology, Dr. Cullis became the founder of 11 companies. In 2014, he started a collaboration with Dr. Weissman, who was working with BioNTech on RNA vaccines, and Dr. Cullis' expertise was crucial in creating a delivery system for the vaccines.

About the Tang Prize
Since the advent of globalization, mankind has been able to enjoy the convenience brought forth by the advancement of human civilization and science. Yet a multitude of challenges, such as climate change, the emergence of new infectious diseases, wealth gap, and moral degradation, have surfaced along the way. Against this backdrop, Dr. Samuel Yin established the Tang Prize in December 2012. It consists of four award categories, namely Sustainable Development, Biopharmaceutical Science, Sinology, and Rule of Law. Every other year, four independent and professional selection committees, comprising many internationally renowned experts, scholars, and Nobel winners, choose as Tang Prize laureates people who have influenced and made substantive contributions to the world, regardless of ethnicity, nationality or gender. A cash prize of NT$50 million (approx. US$1.7 million) is allocated to each category, with NT$10 million (approx. US$ 0.35 million) of it being a research grant intended to encourage professionals in every field to examine mankind's most urgent needs in the 21st century, and become leading forces in the development of human society through their outstanding research outcomes and active civic engagement.

i Immunogenicity refers to the characteristic of a molecule that induce immune responses, including production of inflammatory cytokines.
ii Nucleosides are glycosylamines consisting of a nitrogenous base attached to a pentose sugar (ribose or deoxyribose). Based on their chemical structures, nucleosides can be divided into two classes: ribonucleosides and deoxyribonucleosides. When a nucleoside joins with a phosphate group, it forms a nucleotide, which is the basic unit of DNA and RNA.
iii Toll-like receptors are single-pass transmembrane proteins. They can recognize invading microorganisms or damage-associated molecules and activate immune response. They perform key roles in our innate immune system.