During the research and exploration activities to examine the development of the TCM industry, the highlight of the Guangdong event, Chinese Academy of Engineering (CAE) academician Yu Mengsun and Master of TCM Zhou Daihan, together with scholars in related fields visited Infinitus' global headquarters in Guangzhou where they took a close look at the research being undertaken there, and attended a seminar entitled "Academicians and Masters in Chinese medicine visit Infinitus - a dialogue on the modern development of TCM" at which attendees discussed the current situation and future trends in TCM's modern development. 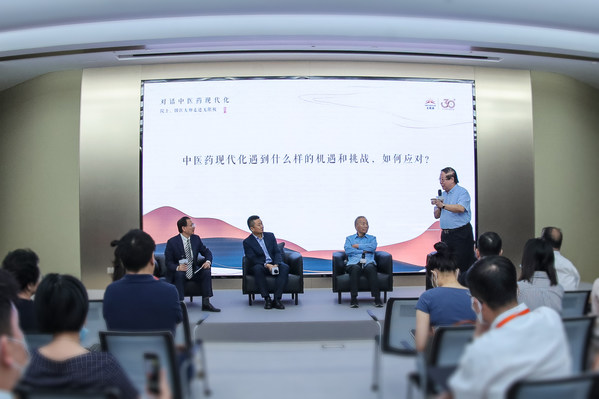 Yu Mengsun (second from right), academician of the Chinese Academy of Engineering, Zhou Daihan (first from right), specialist in TCM, Zhou Bangyong, Vice Chairman of the China Healthcare Association and Huang Jianlong, CEO of Infinitus (China) Company Ltd, in a roundtable discussion on the modern development of TCM

TCM is one of the treasures of science and wisdom that has been part of Chinese civilization going back centuries, and has contributed greatly to the global fight against COVID-19, attracting widespread attention from the international community. At the seminar, Lam Yu, CEO of Infinitus Global, shared Infinitus's practices in promoting the modern development of TCM. The CAE academician Mr. Yu, the Master of TCM Mr. Zhou, China Healthcare Association vice chairman Zhou Bangyong, and Infinitus (China) CEO Huang Jianlong shared their views from different perspectives on the opportunities and challenges facing TCM in modern times, TCM R&D and utilization, and the adoption of TCM by the younger generation, while offer suggestions on what the next stage of TCM's development is poised to look like.

As a large modern firm with 30 years of experience in the manufacturing and distribution of Chinese herbal health products, Infinitus has been keeping pace with the times, seeking innovations and enhancing its independent R&D capability on the basis of inheriting and carrying forward the advantages and characteristics of TCM. Infinitus' scientific approach to R&D, alongside its technological strength, has facilitated the firm's contribution to the modern development of TCM.

From the cooperation with former First Military Medical University in the early stage of research and development through which the firm launched flagship products such as the Health Tonic oral liquid, to today's in-depth cooperation with a number of world-renowned universities including the University of Cambridge, research institutions such as the Institute of Traditional Chinese Medicine of the China Academy of Chinese Medical Sciences and renowned scientists such as Professor Jules Hoffmann, a Nobel Prize winner in physiology or medicine, Infinitus has created a multi-party scientific research platform for the development of high-quality products with the support of the entire industry chain.

With the powerful research and cooperation platform, Infinitus's prowess in research has grown significantly. To date, Infinitus has launched more than 200 products in the health, beauty and household sectors, of which more than 100 have been named High-tech Products of Guangdong Province. The firm holds more than 600 patents.

Infinitus plans to increase its R&D investment in the five-year period from 2020-2024, mainly for the research and transformation of core technologies in key areas such as polysaccharides, phytoncides and prolonged aging, scientific proof of core technologies, efficacy and safety of Chinese herbal products, and basic research into new raw materials and new functions.