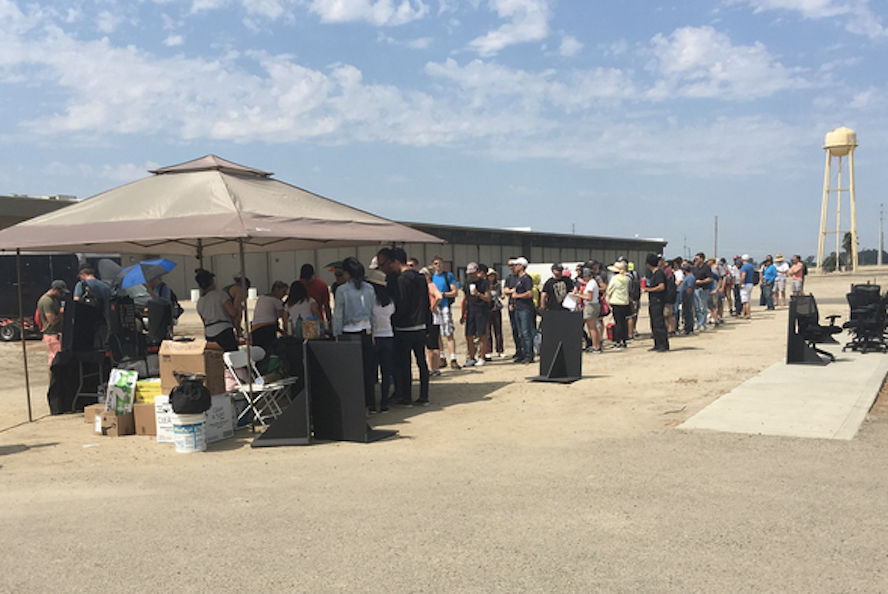 Faraday Future, the U.S.-based electric car startup founded by embattled Chinese entrepreneur Jia Yueting, today announced they have signed a lease for a future manufacturing facility for their high-performance electric, autonomous vehicle, named the FF91. But the new facility is not outside glitzy Las Vegas, as originally planned, but in Hanford, California, a hard-scrabble agricultural town roughly half way between San Francisco and Los Angeles.

Faraday did not disclose the address of the facility, and declined to comment for this story. However, close examination of pictures of the facility released over the weekend by Nick Sampson, Faraday’s chief product architect, cross referenced against existing industrial facilities in and around Hanford indicate the facility is a 1,000,000 square foot former distribution center located a few miles outside of town.

It’s a far cry from the futuristic US$1 billion, three million square-foot electric car factory that Faraday was planning to build north of Las Vegas, providing an estimated 13,000 jobs. On July 10, Faraday announced it was halting construction in Nevada. In today’s announcement, the company projected the creation of only 1,300 jobs at the Hanford facility.

With the announcement, the company says it remains committed to producing vehicles in 2018. "Our new production facility is the latest demonstration of our commitment to getting FF 91 on the road by the end of 2018," said Dag Reckhorn, Faraday Future’s VP of Global Manufacturing. "Despite significant head winds on the path ahead of us, we are laser-focused on that one key milestone."

The location may not be glamorous, and one wonders how the company will attract skilled workers to the remote location, but at least it is cheap. Similar industrial properties around Hanford are leasing at about US$0.20 per square foot per month. That would work out to US$200,000 a month in rent for Faraday, or US$2.4 million a year. Given the remote location of the facility, its lack of access to a major highway, and Hanford’s likely desire to attract tech investment, they may be paying significantly less.

One thing is for sure, Faraday Futures has to watch every penny it spends. The company reportedly put up its Los Angeles headquarters as collateral for a US$14 million loan to cover costs, a small fraction of the US$1 billion the company is reportedly seeking to finance operations. The lack of cash maybe why, according to the company’s announcement, more than 300 Faraday Future employees and supporters voluntarily drove 200 miles from Los Angeles to Hanford to "begin the process of site clean-up, and embrace the company’s new manufacturing home."

The company is also unlikely to get much financial support from its founder and principal investor, Jia Yueting. On July 4, a Shanghai court froze US$183 million in assets of Jia Yueting because his Chinese media and tech conglomerate LeEco had missed loan payments to several Chinese financial institutions. Jia has also been in the U.S. since early July, afraid to go back to China to face debtors who are sleeping on LeEco’s Beijing headquarters trying to recoup anything they can get from the company. Jia has been jokingly referred to as Super Run (Chao Pao), a term that both means super-car and a super Ponzi scheme.

LeEco’s fall from grace was made clear in an unprecedented criticism by some of China’s most prominent technology executives. Posting on poplar social media app WeChat, Zeng Liqing, co-founder and advisor emeritus of technology giant Tencent Holdings, wrote "It [LeEco] is obviously a Ponzi scheme. You don’t belong in the investment market or entrepreneurial world if you can’t see that." Harsh as they were, the comments were "liked" by Tencent’s chairman Pony Ma Huating, and well-known angel investor Xu Xiaoping.

It’s not the first time the word ponzi scheme has been used in reference to LeEco and, by association, Faraday Futures. In November 2016, Nevada’s treasurer Dan Schwarz told the press: "This is a Ponzi scheme," Schwarz said. "You have a new company that has never built a car, building a new plant in the middle of the desert, financed by a mysterious Chinese billionaire. At some point, as with Bernie Madoff, the game ends."

But the political climate in California appears more welcoming. In its announcement, Faraday said State of California, and City of Hanford and Kings County officials, were also on-site to welcome Faraday Future to its new production facility.

"The future of zero emission production is in California," said Panorea Avdis, Director of the Governor’s Office of Business and Economic Development. "Faraday Future’s announcement today is another step towards realizing Governor Brown’s goal of adding one and a half million zero emission vehicles on the road by the year 2025."

Maybe so, but for Faraday, the clock is now ticking to get at least one zero emission vehicle on California roads by the end of next year.