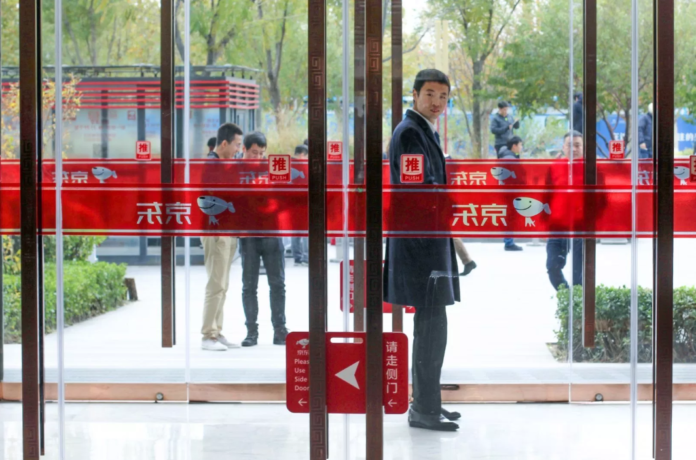 This article by EMMA LEE originally appeared on TechNode, the leading English authority on technology in China.

Renewed rape allegations against Richard Liu, the founder and CEO of JD.com, China’s largest retailer and second-largest e-commerce operator, represent only the tip of the iceberg when it comes to the Chinese tech behemoth’s problems.

In 2018, Liu was arrested in Minneapolis, Minnesota, on suspicion of rape. He was not criminally charged, but the fallout of the highly publicized case contributed to a downward slide in the company’s share price.

On Tuesday, Liu faced renewed allegations as the alleged victim decided to pursue a lawsuit seeking damages of more than $50,000. The suit names JD as a defendant.

Reports of massive layoffs, steep pay cuts, and constant comings and goings in JD’s C-suite have Alibaba’s nearest competitor in an uneasy position, prompting many to ask what’s next for JD and to question whether Liu is fit to stay on as leader.

The company has an excellent track record in terms of providing high-quality e-commerce services and logistics. However, the recent unwanted attention has brought closer scrutiny to JD’s business in general, including the company’s efforts to move into new areas such as cloud computing, finance, and new retail.

The turmoil has been reflected in the company’s stock price performance, which hit a historic low in November 2018 at $19.27, less than five months after notching a high of around $43. The company’s shares have more or less bounced back. At market close on April 16, the stock price was $29.91.

JD is at a turning point. The question is whether the company can develop existing lines of business in logistics, its core strength, while succeeding in new ones, such as cloud computing. Many recent announcements indicate that the company is restructuring, shedding staff, and trying to adapt quickly to new business models and opportunities.

JD’s reported year-on-year growth of net revenue in 2018 was 27.5%, though exact gross revenue figures are undisclosed. By contrast, Alibaba witnessed a 40% year-on-year growth for its core e-commerce business. In 2014, JD went public on Nasdaq, raising $1.78 billion. Four months later, Alibaba made history with the largest IPO on the NYSE at $25 billion.

JD might come in second from a numbers perspective, but it has amassed valuable assets in supply chain and logistics. As far back as 2007, JD began to build out its own logistics network. Dissatisfied with China’s existing delivery infrastructure, it established delivery hubs of its own, starting in Beijing, Shanghai, and Guangzhou.

While its competitors mainly relied on third-party couriers to deliver their goods, JD’s in-house logistics arm allowed it to control the quality of its service. In 2010, it became one of the first e-commerce companies to launch same-day and next-day delivery service.

However, building logistics infrastructure across a country as expansive as China is not cheap. It is believed that more than 70% of the $1.78 billion proceeds JD raised in the 2014 IPO was spent on logistics construction, according to a paper from a Shanghai-based consultancy that was reviewed by TechNode.

In 2017, JD founded a separate logistics business group, raising $2.5 billion during its first financing round in 2018. After the deal, Jingdong Group, as JD is also known, still held an 81.4% stake in JD Logistics, which is currently valued at over $10 billion. The remainder was held by a consortium that includes Hillhouse Capital, Sequoia China, and Tencent.

But JD’s asset-heavy approach to logistics is gradually losing traction in a massive market where rivals like Alibaba’s Cainiao Logistics are also raising the bar in terms of service quality, while enjoying greater nimbleness by creating a network with courier companies outside of the Alibaba group.

Despite its physical assets, JD Logistics recorded a $343 million loss in 2018. In a leaked internal memo, Liu said that if the trend continues, the subsidiary’s funding would last only two years.

What is more, efficient delivery has proved insufficient to boost growth in the current landscape of e-commerce. “JD has not kept up with the new trends in the Chinese market: drawing online traffic and entertaining younger users. Its e-marketplace simply looks like an online shopping mall, which makes people feel bored,” said a longtime observer of JD who goes by the name Youkaku and who claims to have insider knowledge.

As one of the rare tech companies in China without an official co-founding team, JD has been characterized by Liu’s absolute rule. Unlike companies like Alibaba, JD’s operations are not safeguarded by partnerships or succession planning.

For a decade, Liu almost singlehandedly led JD’s employees in the charge for market share. This situation did not change even after 2011, when, in preparation for their IPO, the company welcomed a long line of executives for the first time.

Leading the charge once again, Liu vowed in a Tencent Tech report in February 2017 that JD’s strategy over the next 12 years would be highly driven by technology. He hoped that people would recognize JD as “a successful technology company.”

This year, within the course of a month, three top JD executives have stepped down, including CTO Zhang Chen. The former Yahoo vice president had been expected to lead a fundamental technology revolution in the company.

Youkaku told TechNode Zhang’s leaving reflected that JD’s long-entrenched political culture complete with “fiefdoms and cliques,” which was criticized by Liu himself recently in an internal meeting, according to Chinese media. This makes the integration of new hires difficult. Youkaku believes the executives’ departures will not have a large impact on the organization, since “only one person is the leader.”

According to a JD employee who asked to remain anonymous because of company policy, the organization is overly centralized with inefficient layers of accounting, reporting, and resource allocation.

“Goals and purposes are barely conveyed to each staff member in an accurate and effective way,” this employee told TechNode. JD is run more like a traditional Chinese state-owned enterprise than an agile tech company, she said.

To be sure, JD has made attempts to boost the vitality of certain parts of the organization. In January, the company upgraded its main segments—retail, logistics, and digital technology—into three independent units, with Xu Lei, Wang Zhenhui, and Chen Shengqiang named as chief executives, respectively.

The restructuring was later highlighted by Richard Liu as part of a decentralization push. In an internal New Year’s memo obtained by Tencent Tech, Liu announced that the company headquarters would relinquish some management control and give greater autonomy to the units. “Each business group will fight battles with its own will,” the memo stated.

Liu was raised in a family that worked in the coal shipping business. He refers to the nearly 100,000 (predominantly male) delivery personnel as his “brothers” and has often expressed pride in their employment conditions, which gives them higher compensation and better treatment than JD’s competitors.

Those employed at the company for five years or more enjoy unemployment insurance, medical insurance, accommodation, and full medical expenses. Such benefits are unusual for the industry.

“JD will never fire any one of our brothers,” Liu said in a trade conference in May 2018, as cited by Leiphone.

Yet less than a year later, the layoffs began. In February 2019, the e-commerce giant unveiled plans to cut the 10% lowest-performing executives. It later claimed to be eliminating three types of employees, including those who “could not work hard” for any reason, be it health or family.

Last Friday, a report revealed that Liu took a tough tone in his WeChat Moments, saying, “Those who mess around without achieving anything are not my brothers any more.”

“Mass layoffs are happening right now, and everyone is anxious,” said the JD employee. She told TechNode that many of her colleagues are planning to jump ship for other jobs.

For its part, JD disputes the job cut claims, preferring to point towards its plan to create 15,000 new positions this year as part of its organizational overhaul.

IDC Consulting expects China’s cloud market to become the largest in the world by 2023, accounting for a quarter of global spending on cloud infrastructure.

In 2015, Alibaba invested $1 billion in its cloud computing arm Aliyun, which it had launched in 2009. The investment proved wise. Since then, Aliyun’s revenue has boasted double- and often triple-digit growth, carrying Alibaba’s growth despite a slowing economy.

“In e-commerce, everybody knows the cloud is important. If you don’t offer it, your clients will look at your competitors,” said Chris Dong, research director at IDC China. “They want to retain their relevance.”

Much like Amazon internationally, Alibaba’s early mover advantage crowned it the king of the Chinese cloud services, holding 43% of the market, according to IDC figures for the first quarter of 2018. The same report indicates that it is followed by Tencent at 11%, China Unicom at 8%, and Amazon at 6%.

“Everyone is looking at powerhouses,” Dong said, referring to companies which dominate the market, like Alibaba and Amazon. However, he added, with plenty of potential customers who are not serviced by their cloud offerings, there’s still room for new arrivals. Still, Dong does not foresee JD Cloud aggressively competing with Alibaba, as that would require major investment.

For a long time, people have compared JD with Alibaba, but it appears that comparison is no longer apt. While Alibaba has found success and profit expanding to new areas such as the cloud, finance, and entertainment, JD is still essentially an e-commerce company. The company has been slow to adapt to emerging trends in its core business.

Its unyielding organizational structure, alongside its “macho” and rigid company culture, have also slowed its response to market needs. Meanwhile, Alibaba’s Taobao launched a live-streaming tool in April 2016. Pinduoduo has established a market presence by offering social tools for group-buying models to consumers seeking lower prices.

One possible option for JD to catch up with the e-commerce trends driven by China’s rising millennials could be a merger with Pinduoduo. JD’s presence is strong in higher-tier cities where Pinduoduo is weak, and vice versa. They are also both Tencent-backed and individually outmatched by Alibaba. But this scenario seems far-fetched, given that they are similar-sized entities that appear to lack the financial muscle to make the deal work.

JD’s plan to seek growth in the cloud market, however, takes advantage of its superior logistics network to deliver digital services to areas not yet saturated by the top cloud providers.

JD holds the strongest logistics chain in the countryside, so it is well-positioned to deliver digital services in these areas. “This is where JD Cloud could step in—to build a cloud foundation to help rural governments establish e-commerce capabilities for locally produced goods, so that they can be sold more broadly and effectively on the JD platform,” Dong said.

If it can develop an inclusive and agile corporate culture, and attract a more dynamic team of executives who can implement necessary changes, JD could do a better job of keeping up with or even anticipating technological and internet trends.

A key factor is whether Richard Liu—assuming he holds on to the leadership role—can navigate the changes essential for the company’s long-term survival. Because he has been JD’s indisputable leader, much depends on his standing within the company, as well as his public image.

Additional reporting by Jill Shen and Eliza Gkritsi. With contributions from Elliott Zaagman.