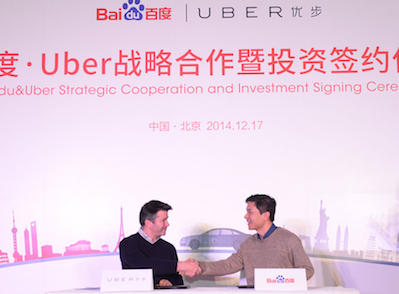 Uber CEO Travis Kalanick and Baidu chairman and CEO Robin Li announced the agreement at a signing ceremony at Baidu headquarters in Beijing. The companies did not disclosed transaction details, but it is believed that Baidu is likely to invest up to US$600 million in Uber.

Under the terms of the agreement, Baidu will invest in Uber and enable users of Baidu Map and Mobile Baidu, Baidu’s flagship mobile search app, to connect easily with Uber driver-partners.

"We’re currently in 250 cities around the world, and the Asia-Pacific region has been a key area of growth for us," says Travis Kalanick.

In recent years, Baidu has expanded into multiple markets outside of China, focusing on Southeast Asia, the Middle East and North Africa, and Latin America.

In July, Baidu launched its first western-language search engine in Portuguese in Brazil.