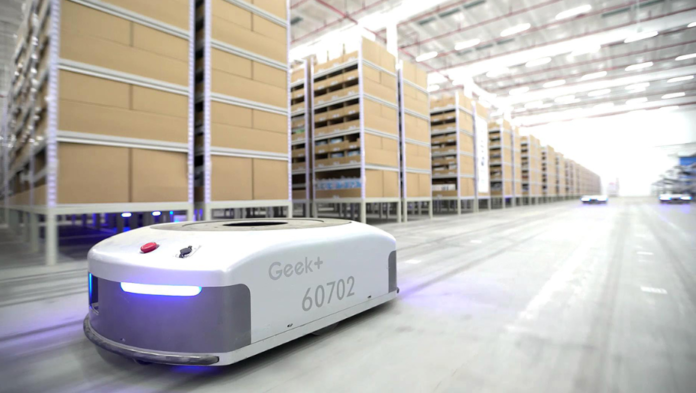 Chinese logistics robotics firm Geek+, also known as Geek Plus, has closed the first tranche of capital in a series C1 funding round that is expected to raise over US$150 million, the company founder announced on Wednesday.

The company also received "clear investment intentions" from several other investors and would "soon complete" the series C1 round at an amount exceeding the US$150 million it previously closed in a series B round in November 2018 — setting another fundraising record in the logistics robotics industry, according to a company statement released on late Wednesday.

The company, claiming to be the top market player in Japan, has by far delivered over 7,000 units of robots and more than 200 solutions. The firm counts Chinese internet giant Alibaba, smartphone manufacturer Xiaomi, logistics firm SF Express, and retailer Suning among its corporate clients.

"As a key infrastructure of an economic system, the logistics sector serves as a pillar for e-commerce, consumption and retail which operate on a scale of trillions. With reliable hardware and effective algorithms, Geek+’s smart robotics solutions enable better efficiency in the supply chain," said GGV Capital managing partner Jenny Lee, in the aforementioned statement.

Behind the rapid international business growth of Geek+ is the continuous support from Warburg Pincus. The American private equity major first poured money into Geek+ by leading its US$60 million series B round in July 2017. In March 2017, the company also closed RMB100 million (US$14.55 million) in a series A+ round led by Vertex Ventures, a wholly-owned unit of Singapore’s Temasek Holdings.