Deck: The Chinese short-video app gives out $144 m during the live broadcasting

BEIJING, Jan. 25, 2020 /PRNewswire/ -- As the exclusive interactive partner of the 2020 Spring Festival Gala aired on the Chinese New Year's Eve, January 24, Kuaishou Technology announced that 63.9 billion user engagements have been made during the live broadcast, which is the highest amount in the history of the gala. 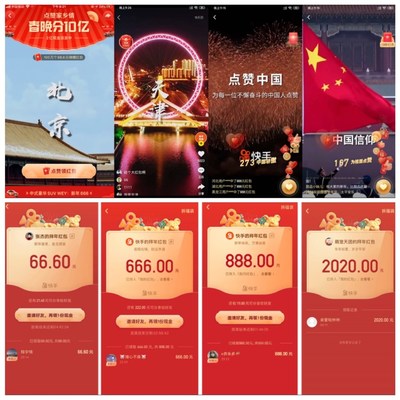 The Chinese Spring Festival, which falls on January 25 this year, is the most important traditional Chinese holiday. CCTV's Spring Festival Gala has been the most watched television program in the world. In 2019, 1.17 billion viewers watched the gala via television, the internet and other terminals during the live broadcasting.

It has been six years since CCTV first adopted the "red envelope" campaign in partnership with internet companies to give out virtual red envelopes during the live broadcast, making interactions via mobile devices an essential supplement to the gala. Previous participants include e-commerce giant Alibaba's payment service Alipay, Tencent's messaging app WeChat and search engine Baidu. In 2019, Baidu App saw 20.8 billion user engagements during the live broadcasting.

This year, CCTV joined hands with Kuaishou to create a new way of snatching virtual red envelopes, which is to watch a video and gives it thumbs-ups instead of the traditional approach of looking at images and texts.

It's been reported that a new virtual gift named "Wuhan, go go go" has been added to the interface of the live broadcasting on Kuaishou. People can give out the virtual gifts during the show and all the profits from this virtual gift will be donated to Wuhan Charity Association in the fight against the novel coronavirus.

Prior to the 2020 Spring Festival, the latest outbreak in Wuhan, central China's Hubei Province, which has killed dozens and infected hundreds, has raised nationwide vigilance and attention. On January 23, Kuaishou donated 100 million yuan and 50,000 masks to Wuhan in response to the spreading of the novel coronavirus-related pneumonia.

People can also choose to donate all the envelopes they snatched during the event to Wuhan. And if they do, Kuaishou will donate an extra 10 percent.

Founded in 2011, Kuaishou is a world's leading short-video community app with 20 billion user-generated short videos in archive. With inclusiveness at its core value, Kuaishou distributes traffic more evenly and make sure people from all backgrounds access Kuaishou easily and find their inner happiness in the community. In the year 2019, people have given out 350 billion "likes" on Kuaishou.