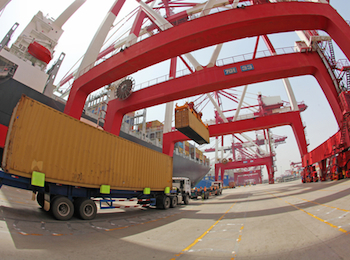 China’s exports contracted 20.6% year-on-year in February, compared with a decline of 6.6% in January. Meanwhile, imports fell 8.0% year-on-year, an improvement from a drop of 14.4% previously.

As exports declined faster than imports, the trade surplus narrowed to RMB209.5 billion (US$32.6 billion) in February.

While yearly changes of China’s trade data are usually distorted by the Chinese New Year, exports fell 12.6% on average in the first two months of the year, compared with a drop of 1.7% in the fourth quarter, suggesting that China’s external profile has worsened, says a research report by ANZ.

Meanwhile, imports fell 13.2% in the first two months of the year, compared with a decline of 8.3% in the fourth quarter, reflecting low commodity prices and sluggish domestic demand.

Imports from Hong Kong was up 88.7% year-on-year in February in U.S. dollar terms, continuing to outperform those from other economies such as Taiwan, Korea and Singapore, all of which saw trade drop with China.

Despite a narrower trade surplus in February, the fall in China’s foreign reserves was smaller in February, indicating that capital outflow may have moderated in February.

China’s reserves fell by US$28.6 billion in February, falling less than market expected.