The total assets of the world’s largest 300 pension funds grew by over 6% in 2013 to reach a new high of almost US$15 trillion, according to a joint research done by Pensions & Investments and Towers Watson research.

The report shows that Latin American and African funds had the highest five-year combined compound growth rate of over 16%, albeit from a low base, compared to 12% in Europe, 6% in North America and around 5% in Asia-Pacific.

Defined benefit (DB) funds account for 67% of total assets, down from 75% five years ago. During 2013, DB assets grew by around 3%, compared to reserve funds’ 15% growth, defined contribution (DC) plans’ over 9% increase and hybrids’ over 8% climb.

"Quantitative easing (QE) and easy monetary conditions have provided an unexpected tailwind for equity markets for the last five years or so…clearly helped many funds given their high allocation to equities," says Chris Ford, global head of investment at Towers Watson.

According to the research, the US remains the country with the largest share of pension fund assets accounting for 36%. Japan has the second-largest market share of around 13%, largely because of the Government Pension Investment Fund. That fund, which is still at the top of the ranking (a position it has held for the past ten years), has assets of around US$1.2 trillion.

The Netherlands has the third-largest market share with 7%, while Norway and Canada are fourth and fifth largest respectively with over 6% share each.

The research shows that 38 new funds entered the ranking during the past five years and, on a net basis, the countries that contributed the most new funds were Australia and South Korea, Russia, Poland, Colombia and Canada.

"It is noteworthy that the 13 major pensions markets are now more than double the size they were ten years ago and pension assets now amount to around 78% of global GDP, substantially higher than the 61% recorded in 2008," adds Chris Ford.

Sovereign funds continue to feature strongly in the ranking with 27 of them accounting for 28% of assets and totaling around US$4.2 trillion.

Private sector industry funds and corporate funds account for 14% and 19% respectively of assets in the research. 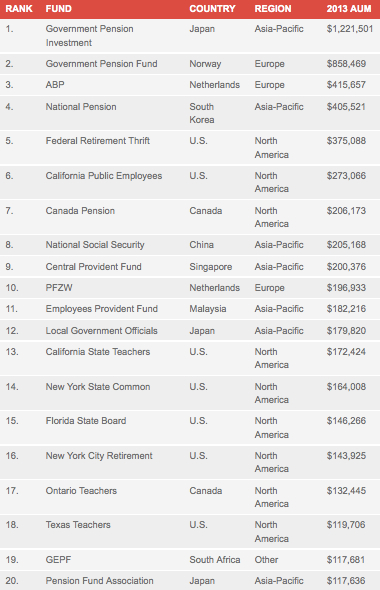 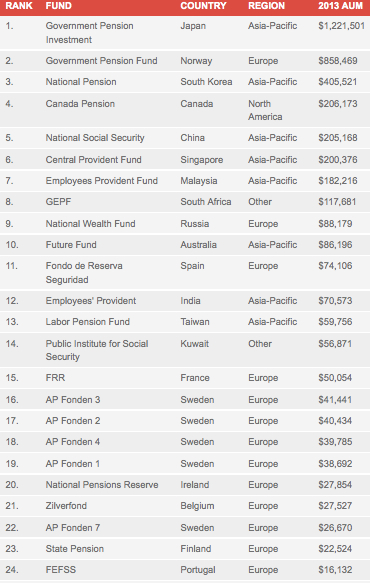