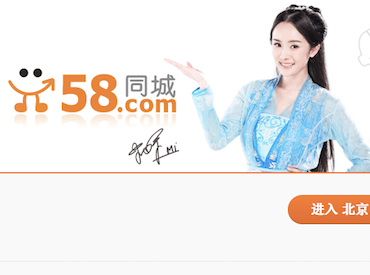 The deal includes approximately 34 million newly issued ordinary shares of 58.com and US$412.2 million in cash. The two companies will continue to operate their respective brands, websites and teams, but will seek to create synergies and further grow the combined company.

The merger is another example of compromise and cooperation between two key rivals that have been engaged in cut-throat competition for years. Two months ago, two of China’s largest taxi-hailing apps, Didi Dache and Kuaidi Dache, said they would merge their businesses to create an industry leader.

58.com also announced an approximately US$400 million additional investment from Tencent Holdings Limited, which is to purchase newly issued ordinary shares from 58.com at US$52 per American Depositary Shares (ADSs).

After the completion of the investment, Tencent will hold approximately 25.1% of 58.com on a fully-diluted basis, up from 19.9% last June.

Founded in Beijing in 2005, Ganji.com reportedly completed over US$200 million new round of financing led by New York-based investment firm Tiger Global Management LLC and the Carlyle Group in August 2014.

58.com is backed by Warburg Pincus, SAIF Partners, and DCM.