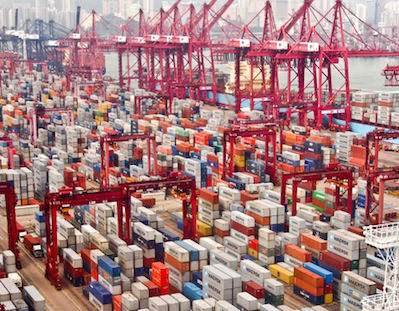 China reported solid export data, with exports in RMB terms grew 18.7% year-on-year in March, up from a 20.6% contraction in February, beating market expectations of a 14.9% gain.

But the figure needs to be interpreted with caution as the distortions in February and March often cause wild swings of the exports growth figures, ANZ AG says in a research report.

For the first quarter as a whole, exports declined 4.2% year-on-year.

Strong exports are possibly due to the recent pickup of electronic supply chains. The launch of new mobile phone models in March have seemingly boosted the supply chain in the region.

Korea’s exports declined by 8.2% year-on-year in March, marking the first single-digit decline in four months, partly due to improvements in shipments of semiconductors.

Taiwan’s March exports also showed a solid improvement in electronic components, which declined 1.4% in March, from a drop of 6.4% in January to February.

Import data indicate a stabilization of commodity prices. Imports contracted 1.7% year-on-year in March in RMB terms, improving from a 8.0% drop in the previous month.

The data should have little impact on monetary and exchange rate policy, says ANZ.

The Chinese central bank will continue to aim for stabilization of the exchange rate through managed capital control.

For the rest of the year, the central bank may start to allow a greater influence by the market forces. The overall policy remains to facilitate two-way volatility, according to the report.