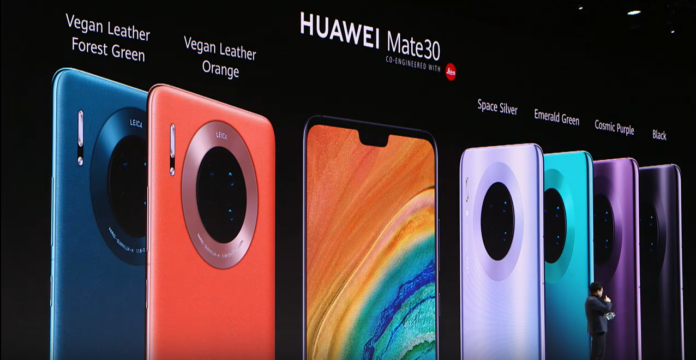 Huawei unveiled its flagship Mate 30 series at its global launch event on Thursday in Munich, Germany. The new phone series, consisting of the regular Mate 30 and the more powerful Mate 30 Pro., will be available in Europe without Google apps after the U.S. banned American companies to supply technology to the Chinese telecommunications giant.

The Mate 30 series runs on EMUI 10, which is based on Android 10. It is the first that doesn’t have software and apps officially supported by Google, due to the reason that the United States Commerce Department is currently preventing Huawei from buying goods or services from companies in the U.S.

Internally, the Mate 30 and Mate 30 Pro phones use Huawei’s Kirin 990 chip. The chip is the first from Huawei to include a built-in 5G modem, and 5G version is available from Mate 30 Pro. Along with the 5G modem, Huawei says that the phone includes 14 antennas for 5G, and 21 antennas in total.

The network speed of 5G mobile phone is much faster than 4G, leading to higher power consumption. To deal with the problem, the Mate 30 Pro has a larger 4,500mAh battery, compared to 4,200mAh in the Mate 30; both phones support fast charging up to 40W wired, or 27W when wirelessly charging.

The camera is one of Huawei’s highlights. The Mate 30 and Mate 30 Pro have a Leica-branded rear camera array contained within a large, circular camera bump that Huawei calls the “Halo ring design.” Inside the “Halo ring” are three cameras and four total sensors.

The lower-tier Mate 30 features a main camera with 40MP and a f/1.8 aperture, a 16MP ultra-wide angle camera with an f/2.2 aperture, an 8-megapixel f/2.4 telephoto camera, and a laser sensor for focusing. The higher-end Mate 30 Pro bumps the aperture of the main camera to f/1.6, bumps the resolution of the ultra-wide-angle camera to 40 megapixels with an aperture of f/1.8, and swaps the laser sensor for a 3D depth sensor.

Huawei also announces its own 4K television, the Huawei Vision which runs the company’s brand-new Harmony OS software, its new smart Watch GT 2, and its wireless earbuds FreeBuds 3 at the conference.