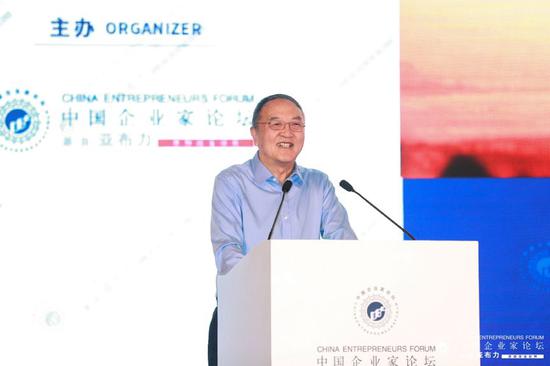 Liu Chuanzhi, the founder of Chinese tech company Lenova Group, said in a recent speech that the U.S. is forcing China to decouple from the world. He called on Chinese entrepreneurs to fight against such effort, and continue to open up, integrate with the global economy, and support reform efforts.

Below is an edited version of his speech at the China Entrepreneurs Forum:

Chinese entrepreneurs are an important force in China’s social and economic development. However, if we don’t know the history of China, we don’t know what we’ve been in the past, how we were timid, miserable and poor, and we’ll have no motivation to make happiness for Chinese people.

Chiang Kai-shek did not fire a shot in the Mukden Incident happened in the evening of September 18, 1931, so Northeast China was occupied by the Japanese easily. Later, after Chiang Kai-shek’s diary was revealed, people know that he actually wanted to fight, but not able to fight. He could only make a portrait of being wronged and bullied and asking the international community for justice. My father-in-law was born in Hunan, once I chatted with him and asked him what was the most memorable moment in this life. He said that was in 1942 when he was captured by the Japanese and luckily escaped, but a young man who acted together with him got a shot in his leg and was caught by the Japanese again. He did not even dare to breathe at that time in hiding. It took place at that time because China was weak and everyone had to be a coward.

China made its attitude clear on the US-China trade war: unwilling to fight, but not afraid to fight; it must fight when necessary. In the past 40 years of reform and opening up, how many things we have done to turn China upside down, but how many things we have not done? From the perspective of the community of human destiny, we certainly are not willing to fight, but of course, we are not afraid, why? Is it useful to be afraid when coming across an evil dog?

Let us analyze in more details. The U.S. government wants to sanction Huawei, which is the commanding heights of the science and technology strategy of the two countries. Then U.S. government shall make up their minds to beat Huawei to death, but they suddenly stopped the attack in the G20 Summit? We can only say that we are temporarily hands off because we found that we have to embrace each other in such an indivisible world situation.

Entrepreneurs in the United States will write a joint letter after they calculate the gains and losses of the trade war. In the chip market, chips used in China and the United States account for 54% of the world, and China alone accounts for 32%. It is not impossible to replace Chinese manufacturing, but it is not meant to be done, you have to pay a big price. This means that if you break the supply to China, I can also break the supply to you, although the area of supply is different. If Chinese entrepreneurs can’t stand it, can American entrepreneurs stand it? So if a trade war breaks at this moment, we will suffer a bigger blow, but they might also be seriously injured, not to mention that the United States is besieged on all sides now too.

The trade friction between China and the United States is definitely a long-term one. It is only a matter of scale. The negative impact of China’s yuan plunged to below 7 per U.S. is unclear at present. The extremist forces in the United States are forcing us to decouple from the world, especially in the high-tech field, but this is definitely a delusion. We must persist in reform and opening up and adhere to internationalization.

Where did our market come from? Before 1978, China had a population of more than one billion, but there was no money to form a market. At that time, we worked hard to make good things and sell abroad with foreign companies earning 100 times more than us.

Then we became a sector leader and we learned how to manage the factory and enterprises. Step by step, people started to have a little money, and the government began to reserve some taxes. We gradually have the base of the market. Today, we have formed the world’s largest market with hundreds of millions of middle-income people. This market is extremely attractive to a large number of new businesses and technologies in the United States and is very alluring to American entrepreneurs.

The battle of Huawei is the commanding height of the technology strategy for us. Although we have certain scientific and technological strength today, our foundation is still very weak, which is manifested when we encounter any real tests. Therefore, we must keep extraordinarily calm, extraordinarily open-minded, and more proactively to engage in the world’s scientific and technological society.

In the past, China’s opening up cooperation with other countries was the result of their money plus our environmental and human resources. But 40 years later, the Chinese are determined to continue the path of reform and opening up, but the cooperation has already had new content. The first is the huge market I mentioned earlier. The second is the foundation of manufacturing. The third is advanced technology and talent in certain areas, and the fourth is that we can also provide money now. Our money is hard to come by, it is not only the sweat of several generations in China but also the cost of our environment. Therefore, we must use the money to generate more funds, to repair our green mountains and blue water, and to invest in our technology foundation.

One month ago, I visited Luxembourg with a delegation of entrepreneurs from Zhongguancun in Beijing. Our trip is for Legend Holdings’ acquisition of a 90% stake in Luxembourg International Bank from a fund of Karl. The remaining 10% stake was taken by the Luxembourg government. The Luxembourg Prime Minister said a word at the meeting that he believed few people in China knew that Legend Holdings had acquired the Luxembourg Bank, but no one in Luxembourg did not know this. The management team of the Luxembourg bank is very satisfied with the new shareholders. They observed us for two years because the company is a high-quality bank with low financing costs and stable profits, but it needs room for development.

I just want to express from this example that in any field, today’s Chinese companies can be internationalized and integrated with the world. What do we need? It is time. It’s moving forward step by step and doing our own thing well. As long as we persist, I believe it will not take a long time that the wicked appearance of the representative of the extremist forces will disappear. They can only sit with us equally at the negotiating table.

There is a strong smell of gunpowder in today’s world. Although China has made great progress, we still belong to developing countries. What is the world like in the future? What about China? To be honest, I don’t know.