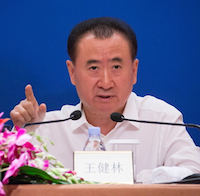 Wanda plans to establish Wanda Financial Shareholding Group in the third quarter this year, in a move to create a new engine for its future growth.

The financial shareholding subsidiary will have total registered capital of RMB30 billion (US$4.84 billion), and will seek to do merger and acquisition deals, as well as offering financial services.

Wang Jianlin, who ranks as the riches man in mainland China, emphasizes that Wanda plans to accelerate overseas investments aggressively in the next few years.

Specifically, the company aims to acquire one or two large cultural enterprises and two five-star hotels overseas during the second half of the year. By the year 2020, Wanda plans to own 15 five-star hotels in major global tourism cities.

Wanda’s total assets increased by 21% over a year earlier to RMB460 billion. Its net income for the first half of 2014 rose by 24% to RMB92.07 billion, according to the company’s semi-annual report.