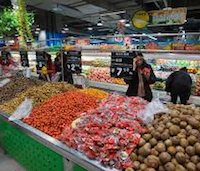 Yonghui Superstores, a Shanghai-listed operator of 288 hypermarkets and supermarkets across 17 provinces in China, is to sell 813.1 million newly issued A-shares to Dairy Farm at RMB7 per share in a private placement deal. The new shares are subject to a three-year lock-up period.

The transaction is still pending shareholder and regulator approval.

Fuzhou, Fujian province-based Yonghui Superstores plans to use the proceeds on replenishing its cash flows and further solidifying its market position, according to the securities filing.

Headland sold down its stakes during the past few years after Yonghui Superstore completed an IPO on the Shanghai Stock Exchange in 2010, and has fully exited its position last month.

Dairy Farm is listed on the London Stock Exchange, with secondary listings in Bermuda and Singapore. Dairy Farm is a member of London-listed conglomerate Jardine Matheson Group.