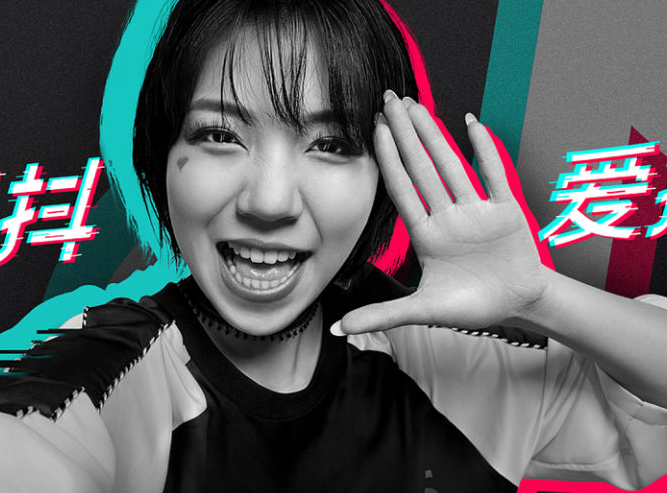 What is the most popular app in China? You’re probably thinking WeChat. Though that might still be true, WeChat now has a serious challenger whose meteoric rise has taken China by storm (and WeChat’s owner Tencent by surprise). That is Douyin (抖音, literally “shaking sound” in Chinese), one of the most popular short video apps in China, as well as worldwide. It is owned by ByteDance (a.k.a Toutiao), an AI-driven media company in China and one of the world’s most valuable startups, most recently valued at $30 billion. ByteDance is a GGV portfolio company.

Douyin is one of the few apps that has enjoyed wild popularity both inside and outside of China. In the first quarter of 2018, Douyin’s international version, Tik Tok, was the most downloaded iPhone app worldwide, totaling 45.8 million and surpassing Facebook, YouTube, and Instagram, according to the American research company Sensor Tower. 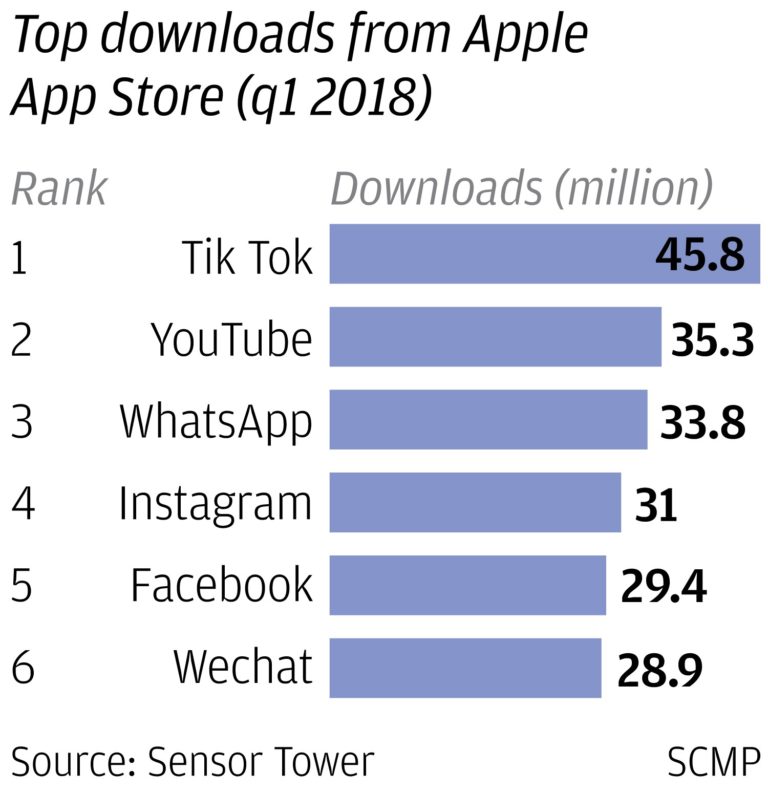 Douyin’s daily active users reached 150 million on June 12, 2018, quadrupling since January. This is remarkable growth for an app that is less than two years old. 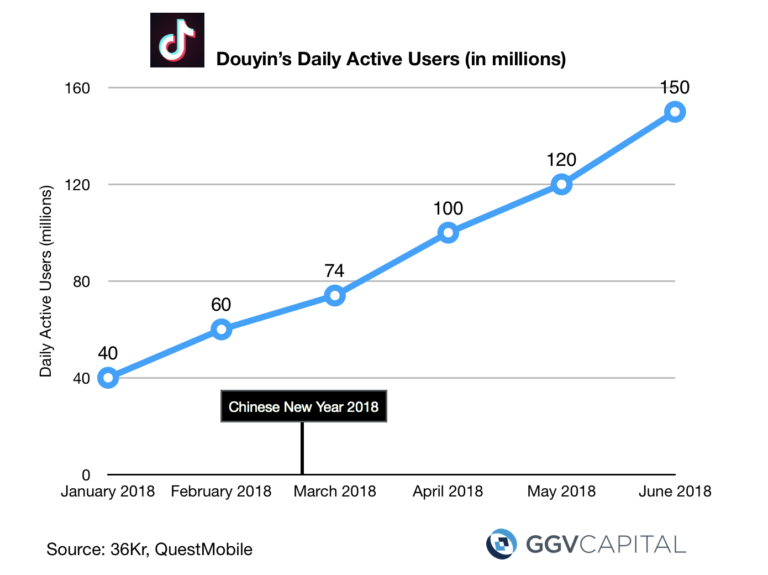 In addition to its flagship news product Toutiao, ByteDance also own numerous other short video apps as shown in the graphic below. Last November, ByteDance merged with Musical.ly, one of the world’s most popular short video apps and also a GGV portfolio company. Hans Tung, managing partner at GGV Capital, facilitated the merger. 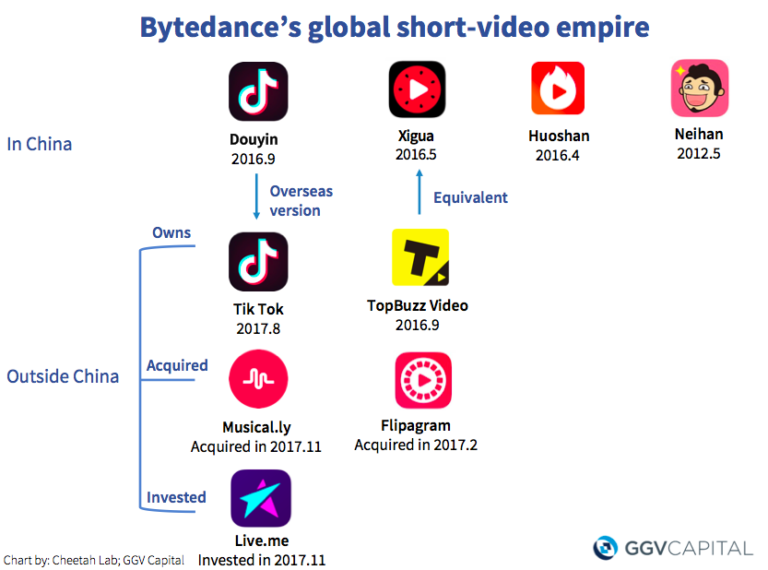 Unlike most video apps, there is no “play” or “pause” button on Douyin. Once you open the app, a video starts playing immediately. You scroll through a bottomless feed of 15-second videos—just like how you scroll through pictures on Instagram. And because it is mobile only and the content is so bite-sized, people consume it everywhere—on the train, on the street, in bed, at work. “Shua douyin” (刷抖音) —scrolling through Douyin videos for hours on end, often in bed—seems to have become the national favorite pastime. The average user spends 20.5 minutes per day on the app, according to Jiguang Data. Given that each video lasts 15 seconds, that’s 82 videos per day. In fact, Douyin had to roll out an “anti-addiction system” this April to remind users when they’ve spent too much time on the app.

The most popular types of content on Douyin are: dance, comedy, babies, life hacks, food, pets, pranks, and stunts (see the last section of this article for links to Douyin videos that are representative of each genre).

Recently, Tencent has blocked links to videos on Douyin (as well as several other short video apps) on WeChat and QQ. Tencent says its move is motivated by regulatory reasons, but many Chinese media outlets have commented that Tencent did so because it feels threatened by ByteDance as a formidable competitor. Tencent is suing ByteDance for RMB 1, claiming defamation, while ByteDance has counter-sued Tencent for anti-competitive behavior and is requesting RMB 1 million in damages. The CEOs of the two companies, Pony Ma and Zhang Yiming, recently had a public argument on WeChat Moments.

Here are some data points on Douyin’s users:

So what makes Douyin so appealing, and why did it grow so fast? Here are eight lessons on Douyin’s meteoric rise that Western companies can learn from:

Douyin treats its top influencers almost as its own employees. It actively helps promote them by subsidizing their traffic. In November 2017, ByteDance held a conference celebrating its content creators and announced it will spend $300 million to help them increase followers and generate revenue. Its stated goal is to help create 1,000 influencers with over a million followers in the coming year.

Douyin understood that its early adopters could determine the entire trajectory of the product. In its early days, Douyin’s team reached out to various art and music schools in China and recruited good-looking young artists to produce high-quality content on the platform, and helped them to grow followers.

Douyin also actively works with MCN (multi-channel network) organizations, agencies in China that specialize in propelling ordinary people to Internet stardom. One of the most popular content creators on Douyin is Dai Gu La K (代古拉K), a 22-year-old college girl who records short videos of herself dancing. She once gained 10 million followers on Douyin within a 30-day span. What appeals to the viewers is not her dancing skills—she’s not a professional dancer—but her cute, infectious smile. She is a client of Yang Cong, a top MCN organizations in China that counts several dozen Douyin influencers in its network. 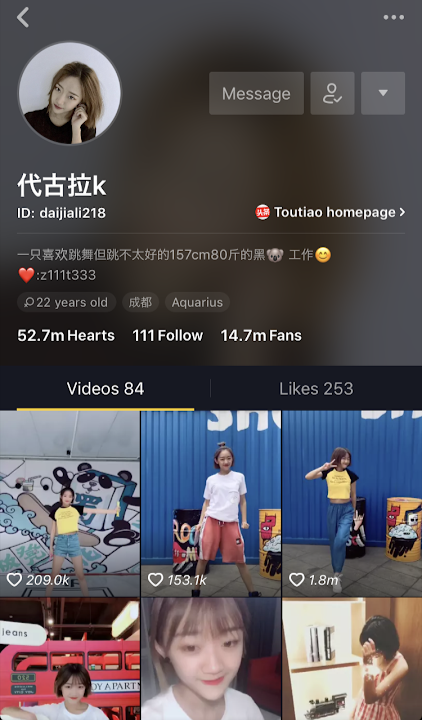 Many viral videos on Douyin are not created by celebrities, but ordinary people who did something really creative or impressive. A popular genre of Douyin videos is “life hacks.” For example, there’s a popular hot pot restaurant chain in China called “Hai Di Lao” (海底捞), and some creative restaurant-goers uploaded videos of some DIY dishes they made at the restaurant, such as stuffing a raw egg and shrimp paste into a tofu ball and then boiling them together. The videos went viral and thousands recorded their own version. Today, if you request the “Douyin Dish” at Hai Di Lao, waiters will bring you raw eggs and tofu balls instantly, no questions asked.

There are many similar examples of Douyin entering the national vocabulary. A “Douyin milk tea” at CoCo (a popular tea chain in China) means “caramel milk tea with barley pudding zero sugar no ice,” because a Douyin influencer discovered that this combination tasted especially delicious. It’s important to note that Hai Di Lao and CoCo did not pay for these campaigns—users spontaneously shared their discoveries, and people trust other ordinary people like themselves much more than sponsored content. Inspired by the Hai Di Lao phenomenon, some restaurants have started to offer customers discounts if they record Douyin videos featuring their food.

Lesson 3: Topic marketing – give people something to make videos about

Douyin regularly launches hashtags that serve as trending topics or themes on the platform. Hundreds of thousands of people participate in making videos on the same theme. 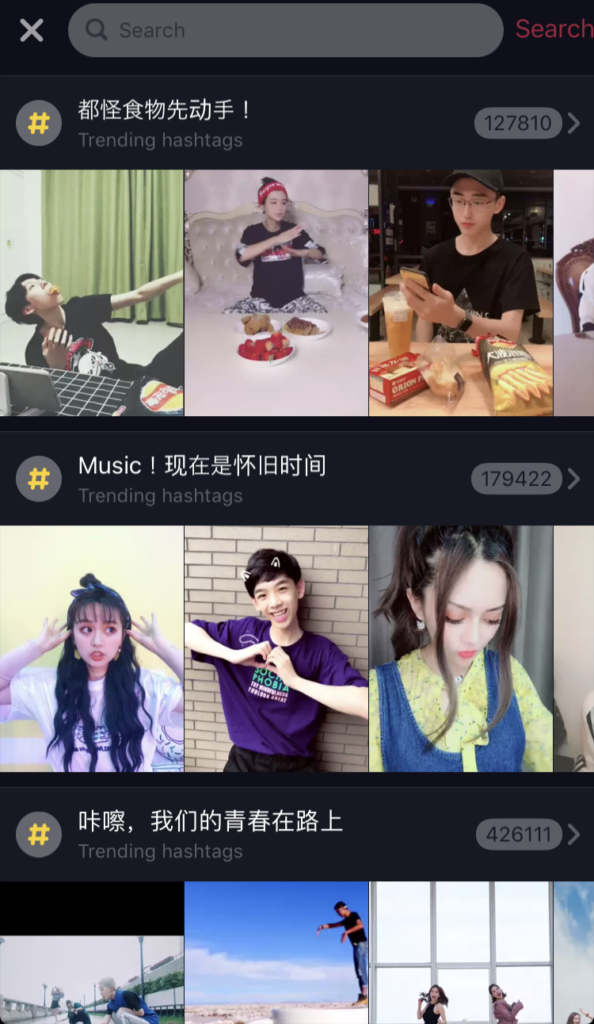 Because of the hashtags, Douyin lends itself extremely well to viral content, such as this “Seaweed Dance”, which has become a national sensation, in the same way that PSY’s “Gangnam Style” took China and the world by storm several years ago.

Many brands, such as Michael Kors, have created “hashtag challenges” that invite users to compete for the most popular video. By partnering with influencers on Douyin, brands can instantly reach millions of followers with the hashtag challenges, and turn these users into their marketers.

Douyin’s product provides a toolkit that enables anyone with a smartphone and a good idea to create a 15-second video that could potentially go viral. This toolkit includes a large library of background music, a variety of filters (see “beautify” button in the screenshot below), easy-to-use editing tools, and even phone accessories that help users hold their phones in place while they’re shooting videos.

Lesson 5: Turn the comment section into a social hub

Some people say the only reason they use Douyin is to see its comment section, which has become a social hub where users interact. It’s often as entertaining as the video itself.

Douyin allows users to view a video and read its comments at the same time, so you don’t need to pause the video to see the comments. As can be seen in the screenshot below, many influencers interact with their followers in the comment section (comments with the tag “creator” indicates replies by the author herself). 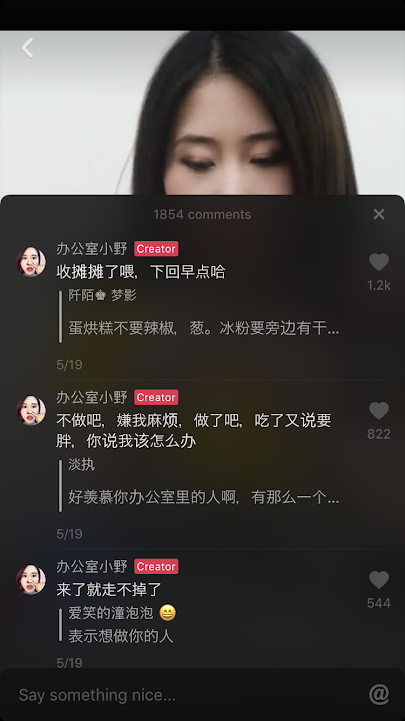 ByteDance calls itself an AI company, complete with thousands of engineers and its own AI lab led by former executives at Microsoft Research Asia. Its core competency is making use of machine learning and algorithms to determine what kind of content would appeal to particular users based on their past viewing behavior.

When you open the Douyin app, the default mode is a feed “recommended for you”. Unlike on Instagram, where you almost only see content posted by people you follow, on Douyin you’re shown content by creators you mostly have never seen before. In this way, you can constantly discover new creators, but almost all of them are making content that’s highly appealing to you.

Douyin also utilizes facial recognition and body segmenting technology to implement key features and special effects, such as changing the color of one’s hair or removing the video background.

Douyin allows creators to embed product links into their videos, lending to a seamless transition from content to commerce. For example, an influencer called “Ye Shi Xiao Ge” (野食小哥), who films himself finding and eating food from the wilderness, has created his own line of food products such as a “Douyin beef sauce.” While you’re watching his videos, a shopping cart icon appears on the right-hand side of the screen to show the merchandise mentioned in the video, which you can then purchase with one click. 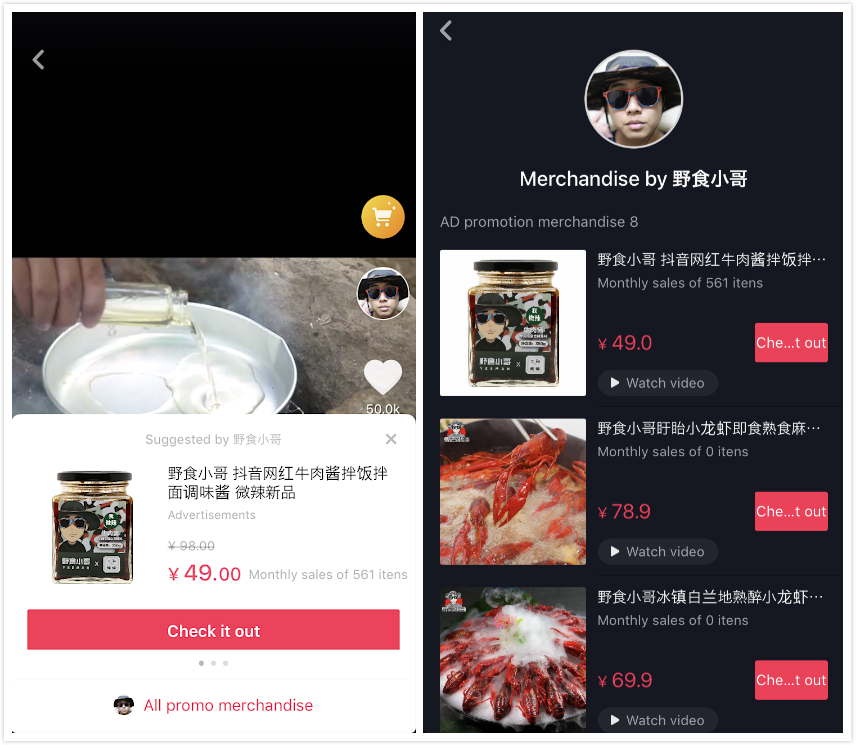 A year after Douyin was launched in China, its English version, Tik Tok, was launched in multiple international markets, and quickly rose to the top of the App Store in Thailand, Indonesia, Japan, and South Korea. Although its product interface is similar to the Chinese version, Tik Tok has also been localized organically by users in these markets, who integrated local music and culture into their short videos. For example, face painting seems to be a popular genre in Indonesia, and K-pop videos go viral in South Korea.

Having an international product also enable viral effects to spread globally. On Valentine’s day this year, South Korean superstar Lee Jong Suk posted a Tik Tok video featured him putting his chin on a hand and giving a heart-warming smile in multiple scenes. The cute video, hashtagged #iamyourvalentine, earned him over 680,000 likes on Tik Tok within a week and became a worldwide phenomenon as thousands recorded their own rendition of the video.