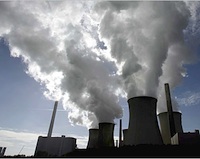 Global emissions of greenhouse gases grew more quickly between 2000 and 2010 than in each of the three previous decades, despite a growing number of policies to reduce climate change, according to a new report by the Intergovernmental Panel on Climate Change (IPCC).

The IPCC is the international body for assessing the science related to climate change set up in 1988 by the World Meteorological Organization and the United Nations Environment Program.

The latest report is based on analysis of 1200 hypothetical scenarios of the consequences of global warming from scientific literature.

It is the latest major assessment of the global warming risks the world faces since the organization published its last report in 2007.

In order to achieve the goal of limiting the increase in global mean temperature to two degrees Celsius, an objective agreed by many international organizations, global greenhouse gas emissions will have to be cut by 40% to 70% compared with 2010 by 2050, and to near-zero by the end of this century, the report says.

But the challenges are enormous. Only if major institutional and technological change are made will the world have a better than 50% chance to achieve that objective.

"There is a clear message from science: To avoid dangerous interference with the climate system, we need to move away from business as usual, "Ottmar Edenhofer, one of three co-chairs of the working group that authored the report, says.