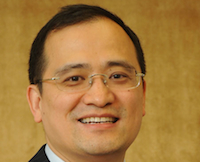 As share of GDP, China’s foreign assets including its official reserves were only 65% in 2013, much lower than Japan’s 167%. If history is a guide, China’s financial liberalization could release an additional US$9 trillion outbound investment from today’s US$6 trillion.

China has been diversifying its foreign reserve assets, according to available data. The share of U.S. dollar assets has been declining from 66% in 2006 to 45% in 2013. We estimate that about 15% to 20% of China’s foreign exchange reserves are in Euro-denominated assets in 2013.

By the end of the first quarter 2014, China’s foreign reserve was close to US$4 trillion, equivalent to roughly 40% of its GDP. If China continues to diversify its reserves away from the U.S. dollar, how would it affect the rest of the world?

Given there is no country of China’s size emerging at such a fast pace, many use Japan’s experience to provide some hints on how China could evolve in the future.

One obvious outcome was that Japan increased its asset positions in foreign currencies. In addition to foreign direct investments, there was also a strong increase in overseas portfolio investment after Japan’s capital account liberalization and domestic financial liberalization.

For example, Japan’s offshore portfolio investment in 2013 stood at US$3.6 trillion, which was three times as large as the outward direct investment in the same year and represented about 45% of foreign investment position.

In contrast, the size of China’s foreign exchange reserves is huge, but the reserves appear to be concentrated and have limited role in global financial markets. In fact, China’s foreign reserves ratio to GDP has already surpassed that of Japan, reaching over 20% in 2002, four years earlier than Japan.

While China’s foreign exchange reserve as a share to GDP is much higher than Japan’s, the ratio of China’s foreign assets to GDP was only 65% in 2013, compared with Japan’s 167%.

In particular, the outward direct investment and portfolio investment constituted only 15% of China’s total foreign assets in 2013, compared with Japan’s 60%. If China were to attain the level of foreign asset exposure as Japan does, China’s foreign assets should have been US$15 trillion or an additional outflows of US$9 trillion from today’s US$6 trillion.