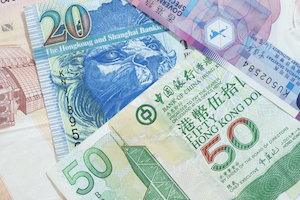 With the economy recovering steadily, it is now a market consensus that the U.S. Fed will likely raise interest rate in 2015. The Hong Kong government is worried that such a move will cause massive capital outflows and result in a "perfect storm", citing that the accumulated capital inflows to Hong Kong in the past few years was estimated to have reached HK$1 trillion.

This view is legitimate but seems to be over-exaggerated. Under the Linked Exchange Rate System, HK$ base rate will also need to rise in tandem with the U.S. Fed Funds Rate. Therefore, if the yield of US$ starts to rise, the HK$ yield will follow, reducing the pressure of capital outflows.

Meanwhile, from an exchange rate perspective, HK$ asset tends to provide a good hedge as the US$ strengthens. Under this monetary regime, a US$ rate hike does not immediately imply capital outflows.

Furthermore, we think that it is the quantity of money matters more than the interest rate level. Portfolio inflows to Hong Kong have been clearly associated with the U.S. quantitative easing.

The easing of other central banks, such as Bank of Japan and ECB may also see an extended period of accommodative monetary policy. Hong Kong’s capital account will still likely see an inflow-bias in the near term.

More importantly, Hong Kong will benefit from China’s capital account liberalization, notably outflows. In our previous study, we estimate that China’s foreign assets should have been US$15 trillion, 2.5 times of today’s level of US$6 trillion, if it were to follow Japan’s experience.

Against this backdrop, China’s investors will likely be allowed to invest offshore and become a new source of capital for Hong Kong’s market. The recent experiment of Shanghai-Hong Kong Stock Connect indicates that this structural advancement of Hong Kong’s financial infrastructure will attract more global investors.

We also believe that the southbound flow of the stock connect will seem to be more attractive than the northbound. Hong Kong is set to become the de facto "international board" for China’s investors, making this stock market linkage in favor of Hong Kong.

Theoretically, an interest rate hike will inevitably and inversely affect asset prices. By valuation, property price will be under a downward adjustment pressure as mortgage rate goes up. However, whether real estate prices will actually fall will still be subject to the supply-demand condition, inflation rate and buy-rent gap.

If the interest rate normalization process is gradual, the property price will likely correct in an orderly fashion. Given a tight supply condition in Hong Kong, the nominal yield of real estate may actually climb as landlords may lift rentals to compensate higher cost of mortgage, so real estates will maintain attractive as alternative fixed income assets.

Nonetheless, as Hong Kong Monetary Authority (HKMA) has already implemented the macro-prudential measures in the past few years, property-related exposure has declined substantially from previously 40% before Global Financial Crisis to 28% in June 2014.

Our previous simulation study suggests that the risk for Hong Kong’s mortgage holders to run into negative equity is small. Due to the tightened loan-to-value (LTV) requirement, the loan sizes in the recent years have also been contained, providing a buffer as high as 54% for the cohort of 2012. Therefore, the property risk of Hong Kong’s banking will unlikely trigger systemic financial risk.

The risk may actually be China-related. By May 2014, claims on mainland entities rose to HK$3.8 trillion, representing 31% of total claims, much higher than less than 6% in 2007.

Of the total mainland’s exposure, 75% were interbank related. In the period of May 2010 to May 2014, the claims on Mainland’s entities rose HK$3 trillion, while total loan growth of Hong Kong’s banks rose HK$3.3 trillion.

Yield gap between the onshore and offshore markets has propelled such a development in recent years. An earlier study estimated that if China’s interest rate rose by 25 basis points, Hong Kong’s external loan growth will increase by 5 basis points after one year, indicating that the relatively tight liquidity condition in the onshore market is the key driver of Hong Kong’s loan growth.