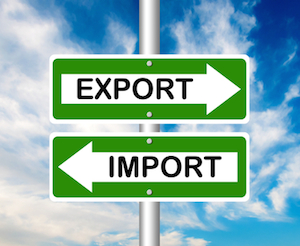 China’s export growth slowed to 9.4% year-on-year in August, down from 14.5% in the prior month, but still remained upbeat, reflecting continuously improving external demand.

As the sub-index of imports in the U.S. ISM remained above the expansionary level since November 2012, and the recent U.S. data continued to beat market expectations, China’s exports will likely remain elevated for the remainder of this year.

China’s import growth fell 2.4% in August, following a 1.6% drop in July. The sluggish imports not only reflect the impact of the commodity financing crackdown, but also suggest that the domestic demand slowed again.

There appeared some inconsistency as China’s export growth outpaced that of port throughput significantly in recent two months.

We don’t think it necessarily points to a resurgence of export over-invoicing, but could reflect that the shipment of high valued-added consumer goods, such as smart phones, picked up strongly in the third quarter.

As exports outperformed, China’s trade surplus hit another record high at US$49.8 billion, following US$47.3 billion in July.

The large trade surplus, plus the decent RMB yields, will add appreciation pressure on RMB if the central bank does not intervene intensively into the market.

The upcoming quantitative easing from the European central bank could bring in more capital inflows as well.